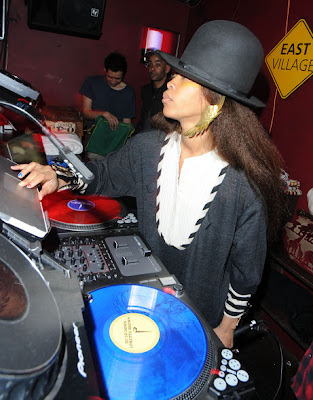 If you were at the East Village Club in Shoreditch, London (it's in London, not New York, which is confusing) on Sunday night, you may have had the opportunity to witness Erykah Badu, queen of neo-Soul and nudity, spinning actual records behind a DJ booth. She let her hair down (all the way down, that is, after its initially being tucked beneath a big ol' bowler hat, which is what you do in London if you wanna look all proper) to plant her feet behind a turntable for some very happy clubgoers.

Erykah was in the UK to ...
support Nas and Damian Marley at their "Distant Relatives" concert, but she made a pit stop at the East Village Club, where, alongside DJs Eric Lau and Spin Doctor, she showed off some beatmixing skills we had no idea she possessed. Of course, we shouldn't be surprised, considering her brilliant discography, crate-digging "Honey" video, and her eclectic taste in music. The woman can do anything. Including tweeting during her labor.
Lesson learned: you never know what to expect from Erykah Badu. One minute she's DJing, the next minute she's not wearing a hat, and then the next thing you know, she's pumped for The Hangover 2. lol
Posted by afowzocelebstar