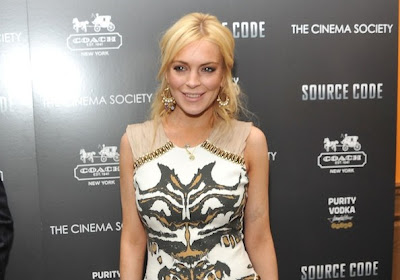 Lindsay Lohan is easing back into the glamorous life of a Hollywood actress. Though she is more well known these days for rehab and court trials, the starlet did her industry duties and attended The Source Code premiere on Thursday night.

She donned a ....
rocker-chick black and white mini dress with black tights and some funky jewelry at the Manhattan event.
Per usual, she's being bombarded with drinking and drug rumors, especially after she took a spill outside of an NYC bar this week. She tweeted after rumors started buzzing about her alcohol relapse: "Is it not allowed to slip and fall? I'm always a klutz!!!"
It looks like she got her composure back for the premiere of Jake Gyllenhaal's new flick
Posted by afowzocelebstar