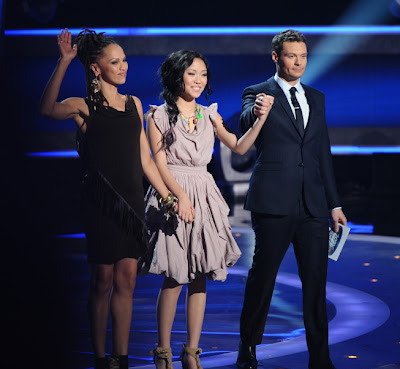 OOOOHHHH No!!!!!
Two more ladies fell in "American Idol's" 10th season last night (Mar. 31), as Thia Megia and Naima Adedapo were both eliminated at the end of last night's episode. Their farewells came after Wednesday night's Elton John-themed performance episode, and while Thia delivered a heartfelt rendition of "Daniel" and Naima put a reggae spin on "I'm Still Standing," the performances were not enough to sway the voters. Paul McDonald, who joined the pair in the bottom three, survived to sing another week.


In a conference call today, Thia and Naima discussed Wednesday's performances, last night's emotional elimination, and the fact that the four contestants eliminated thus far have all been females.

Thia: I really didn't know what to expect at all. There are a lot of great singers in this competition, so I guess I was feeling a mixture of emotions before getting up on stage, because I wanted this so bad, but I guess everyone else is just so incredible. You just kind of prepare yourself for whatever happens, but I didn't really know what to feel at all, to be honest. But I'm happy for Paul -- I'm happy for the both of us, because we're all going to be going on tour, and from all the exposure that we've gotten from the show, it's just been incredible. Knowing that part of that millions of people voted for you, it's such wicked flattery, you know?

Do you wish you had sung more upbeat songs? You did sing a lot of ballads and Randy kept saying that you were making 'safe' choices every week.

I guess for the previous weeks that I've done ballads, I do regret not choosing more upbeat songs. The last performance that I did, I don't regret at all, because I dedicated that song to my brother and I poured all of the emotion that I had inside of me into that song, and I don't regret one bit of it. So I'm happy that the last song I got to do on the show was dedicated to my big brother … I just hope America knows that I can do so much more, because the previous auditions that I've done before the live shows were more upbeat and more on the contemporary side.

How tough for you was the elimination?

It was just natural reaction. I felt a bit devastated last night, but I didn't cry for more than 15 minutes. I just told myself, Things happen for a reason, and this is not the end of it, and from all the exposure that I've gotten on the show, this is definitely not the end of the road. I feel like this is my chance to show America that I don't just sing ballads and I can do so much more … Especially during the tour, we'll be able to sing songs that we haven't been able to on the show. [With] 'Theme of the weeks,' I felt like what I wanted to do didn't fit in, but I'm excited for the tour.

This season, four girls have gone early on. Was that something you and the other girls has been concerned about or discussed before the finals began?

Naima: We weren't really concerned, because we all have faith in ourselves. When it comes down to it, the reality is that more than 50 percent of the audience is little teenage girls, and once they get a crush, we're done! They dominate, and that's all right. But we didn't really have too many conversations about it, because we were all pretty confident in our work.

What's the one thing you're going to miss most about the competition, out of all the stuff you got to do?

Shopping! I think that was one of the biggest, best parts for me. I mean, performing is everything, but when you get to shop and when you get to do accessories, shoes -- oh my God, I get such a kick out of that!

Before Wednesday, you had been in the bottom three of the competition. With the reggae performance, had you decided that you needed to shake things up and get people's attention?

Honestly, I just wanted to show every piece of me. That's what I've been trying to do: I've been trying to take opportunities every time to show a new thing, show something different about me, and I hadn't really gone roots reggae, and that is a big part of me. … I had some people telling me, 'I don't know about it,' but for me, I'm really about staying true to myself, and once I have my mind set on something, I just go after it. I did what I did, and I have no regrets about anything I've ever done on the show. I'm happy that I was able to show that side of me.
Posted by afowzocelebstar