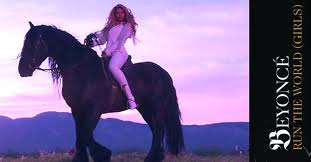 It debut at No1 on my chart but it seams people in America beg to differ cause the song debut on the Hot hundred at
No #33 selling only 77k downloads and garnering just over 18 million audience impressions. The figures earn the song a placement at #23 on the Digital Songs tally and #65 on the Radio Songs chart, respectively.

In contrast, both of Lady GaGa and Britney Spears’ 1st singles – ‘Born This Way‘ and ‘Hold It Against Me’ - debuted at #1 on the Hot 100. However, both records received more promotion than ‘Run The World’. Honestly i for one, think Beyonce has a back up plan to take it to No1 so no worries cause think about it, the song came out in a hazy manner with the leak of the unofficiall one first that trew everyone off base, and then the song debuted on the 26th in America, just 2 days before the tabulation so i think its more of a triuph than a loss cause we know what next week is gonna look like
Posted by afowzocelebstar