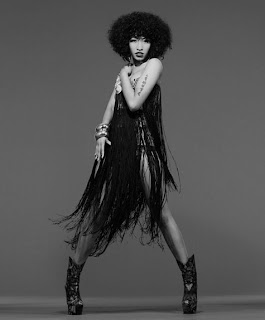 well guess what? im not sure but Nicki Minaj may the latest name to join the X Factor USA judging panel.

Why do i have my assumptions? well i got em Via the New York Post which said ....

Hip-Hop sensation Nicki Minaj is in talks with Simon Cowell to be a judge on his upcoming Fox talent show “The X Factor,” Page Six has learned.
The Queens-bred star, famous for her wild and outlandish outfits and impossibly curvy figure, met with Cowell in Los Angeles a few weeks ago. A source told us, “Simon thinks Nicki is fantastic. She’s sassy, she looks great and she has bags of personality.
“Nicki has a large following and she fits well with the ethos of the show, which plans to usher in a new generation of musical talent. ‘X Factor’ is aiming for a younger audience. Those aged 12 and over can audition, and [the English version has] launched successful artists from other genres of music than pop.
“This isn’t a done deal yet, but Nicki would be great for the show. She fits the ideal that ‘X Factor’ will be exciting, vibrant and different. And the show would also be great for her career.”
Former Island Def Jam Music Group chairman L.A. Reid — who launched major acts including Jay-Z, Justin Bieber, Kanye West, the Killers, Bon Jovi, Pink, Usher, Jennifer Lopez and Rihanna — was last night confirmed as one of the stars on the much-speculated-about judging panel. 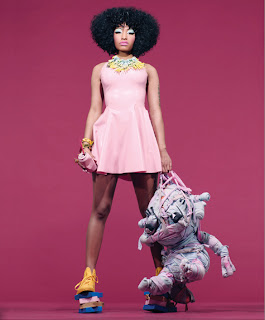 Other names being considered to join Cowell on the panel include Tommy Mottola, Pussycat Doll Nicole Scherzinger and British pop star Cheryl Cole. Sources said Cowell is still deciding on the right mix of judges, and Minaj, who’s now touring with Lil Wayne, could be a good complement to the more experienced Reid and Mottola.
Auditions for the show, which starts on Fox in the fall, will begin on March 27 in LA. Solo artists age 12 and over and vocal groups will battle for a $5 million recording contract with Syco/Sony Music. A rep for Cowell and “The X Factor” wouldn’t comment on Minaj, saying it was “early speculation.” Minaj’s reps didn’t get back to us.
If the UK version of the show is anything to go by, Simon and LA Reid fulfil the ‘industry’ aspect of the panel, ultimately leaving two open slots – one for a seasoned female artist and one up-and-comer. Needless to say, Ms. Minaj would fit quite effortlessly into the latter – and more than anything would be a great judge. guess we'll just have to wait an d cross our fingers.
Posted by afowzocelebstar