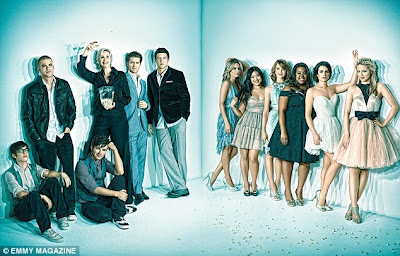 YaaaYYYYYY!!!!!!! In a recent interview, Cory Monteith revealed that the gang is currently working on two new episodes. The first is called Born This Way and as previously speculated, it will pay homage to Lady GaGa's latest smash anthem. Cory explained: "One, 'Born This Way', is a classic Glee episode where we explore embracing the things about ourselves that we don't like and tailoring our performances around that."
After that, the gang will tackle the hits of "artists that may have been neglected or underappreciated over the years," such as Bjork, though Cory admits nothing has been cleared on that front yet.
Besides specific episodes plans, it has also been revealed that the staff at McKinely will be adding a new face to the fold. Sources reveal that when the show comes back from it's hiatus (yes, we will be without it for a few weeks after tonight), the school will be welcoming Dr. Shane, "a very smart, cool and kind psychiatrist." No word yet on who has landed the role of the good doctor or whose psychological problems he or she has been brought in to deal with. They certainly don't have slim pickings though! Between the OCD guidance counselor, the closeted cheerleader and the narcissist known as Rachel Berry, whoever they are is going to have their hands full! OMG i cant wait!!!!
Posted by afowzocelebstar

Email ThisBlogThis!Share to TwitterShare to FacebookShare to Pinterest
Labels: Glee