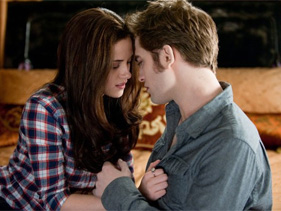 Robert Pattinson and Kristen Stewart's did-they-didn't-they MTV Movie Awards kiss last year may have ranked among our worst memories of Rob, and if you ask me, the "Twilight" twosome could do it better. (Exhibit A: Ryan Gosling and Rachel McAdams' acrobatic acceptance speech, which still rocks.) Will the third time be the charm for Robsten? (lets hope not)
Help us find out by nominating them for a Best Kiss golden popcorn at the 2011 MTV Movie Awards!

Yep, it's that time of year again! Voting begins today in 13 categories, including Best Movie, Best Fight, Best Badass Star and the brand-new Best Line From A Movie ("Release the Kraken." "I'm 6'5", 220 pounds and there are two of me.")
Browse all the nomination categories and cast your vote at MovieAwards.MTV.com. Voting is open now until Tuesday, April 5. The victors will proceed to the final round of voting, which takes place May 3 through June 4. And, of course, the winners will be announced at the 20th annual Movie Awards, airing live on Sunday, June 5 at 9 p.m. ET.
Oh, and did we forget to mention that Kristen and Taylor Lautner's "Eclipse" kiss is also a contender? Take note, Team Jacobers!
Posted by afowzocelebstar