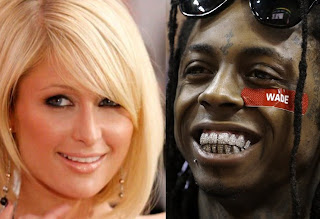 Lil Wayne may be pairing with a fellow convict on his next record. The Young Money rapper and Paris Hilton are cooking up a possible collaboration.

The blonde heiress interviewed Wayne for the April issue of Interview magazine, but Weezy was the one who offered his services. “I was gonna ask you, how are you gonna release an album and don’t get me on it?” he told Paris, who is prepping ...
her sophomore effort for this summer.
“Well, if you would be on the album, then I would be honored,” she replied. “That would be the sickest thing. We should get each other’s phone numbers so we can call each other after the interview or text or something.”
It didn’t take any convincing for Wayne to jump on board. “Cool. Sounds good,” he said before exchanging digits with the socialite.
While they may seem like polar opposites, both celebrities have served hard time and shared their common experiences in the magazine. sounds like a good idea
Posted by afowzocelebstar