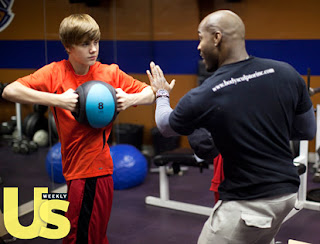 Listen, we're all for fitness. But let's be real with each other. We think the puzzling thing about Justin Bieber's workout situation is that he even HAS to work out. Isn't it, like, a universal truth that...
teenaged boys burn more calories, like, watching TV than most people do running a 10K?

We mean... really. First the haircut, then the mustache "news," and now we have to deal with the fact that Justin Bieber is evidently slimming down? We're pretty sure his 17-year-old constitution will yield major results just by his changing one modicum of his diet, like switching from drinking heavy cream to whole milk instead. 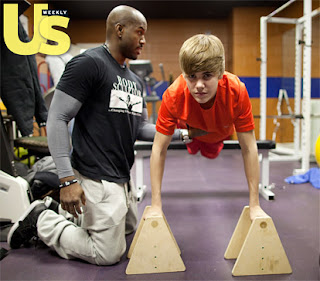 Or perhaps Bieber's looking to bulk up? Is the "One Less Lonely Girl" singer looking to wow Selena Gomez with his rock-hard biceps? Seen here in UsMagazine.com, with his trainer Dolvett Quince, he seems committed to weight and strength training. Word on the street is that this dude's packing a six-pack.

Belieb it! Bieber's buffing up. Next thing you know, he's gonna look like The Rock. What do you think? Are you psyched for Justin Bieber to unveil a new bod for summer? Or would you prefer that he stay as-is? 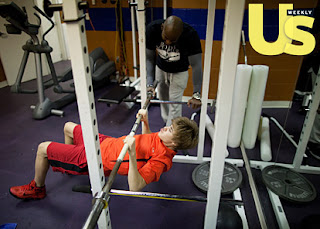