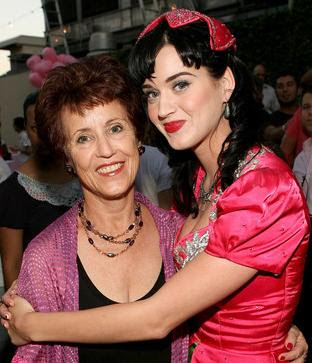 Katy Perry's mother Mary Hudson is an evangelical Christian pastor, along with the pop star's father Keith. Mary decided to pen a book to show how her daughter’s choices have impacted on her ministry in “both negative and positive ways.” She is now looking for a publisher to release it. A book proposal obtained by the New York Post newspaper states: "This memoir is her story, in her own words. Mary and Keith Hudson have been Christian Evangelists long before the world every heard of Katy Perry. "Amid a torrent of negative reports from magazines and entertainment shows, Mary Hudson wants to tell 'her story' and dispel a lot of rumors. Katy's success has impacted her ministry in both negative and positive ways.

"She loves her daughter very much and is very proud of her accomplishments, but disagrees with a lot of choices she makes in her career. This memoir is to set the record straight. It is not Christian proselytising or a Katy Perry tell-all. It is the story of Mary Perry Hudson." Katy -- who shares her parents' faith and has a 'Jesus' tattoo on her wrist -- has previously revealed her parents think her husband, former womanizer and drug addict Russell Brand, is a “great man of God.” She said: "My mom has this idea about Russell that he's going to be a great man of God and his transition is happening. "I think it is happening in some way, but won't be exactly specific to what my parents think. Can you imagine where he's come from to where he is now? There's got to be a reason why he's arrived at all." We'll just have to wait and see!
Posted by afowzocelebstar