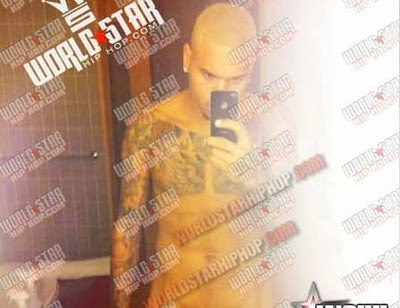 On-air personality Big Boy had Chris Brown turning red during his visit to Power 106’s “Big Boy’s Neighborhood,” where he addressed his naked picture controversy. When confronted with questions about the origins of the leaked image, the blond singer let his laughter do most of the talking.
“I have nothing to say,” said a bashful Breezy, giggling while clarifying who the pic was for. “Definitely a girl, definitely a girl. It was an out-the-shower shot. […] I’m comfortable with my body, I don’t care about all of that.” He explained how he first found out that the revealing shot had hit the net. “I was just on my video game, playing a video game, and I was looking at Twitter and was like yeah!” he continued. Sometimes i wonder what all the fuss over this idiot is about but at the and i always shuv it off as young fun but this is beginning to piss me off too damn much. Grow the hell up C Breezy
Posted by afowzocelebstar