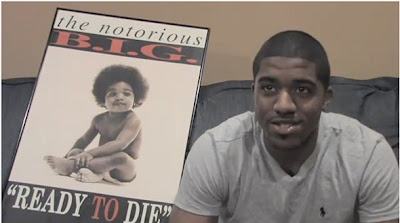 Eighteen years after rivaling the naked baby on the cover of Nirvana's Nevermind as The Most Famous Baby On An Album Cover, Keithroy Yearwood, the diapered and Afroed baby on the cover of The Notorious B.I.G.'s Ready To Die album, has come out of hiding, giving the New York Daily News a fascinating interview about what it was like being ...
Baby Biggie.

Well, he was never "hiding" exactly, but the New Jersey resident is answering the question a lot of people have been asking for a very long time: Who is that baby? Some assumed it was one of Biggie's kids, but it turns out that Yearwood was just chosen in a casting call for babies who resembled the slain rapper, who was tragically killed 14 years ago.
The baby Biggie gig earned him only $150 (and job offers to play a baby girl), but it's got to be pretty cool being the face of one of the most epic albums in all of rap history. In fact, Yearwood was 8 when he discovered that his face was plastered in the middle of the billboards in Times Square. what a way to come up! use what u already have bro! it could take you olaces
Posted by afowzocelebstar