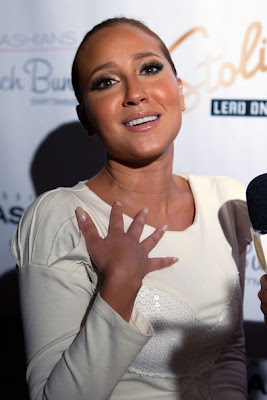 Adrienne Bailon may be best known as a member of R&B group 3LW and a star on Disney Channel’s “The Cheetah Girls,” but she has even bigger aspirations. The singer-actress says that she wants to be the next Oprah Winfrey.

“We’re in talks about a possible talk show,” reveals the 27-year-old, who co-hosted
“Maury’s Most Talented Kids” last year with Maury Povich. “[Producers] approached me actually. That’s where the whole Maury thing came up. People are like, ‘Why is she doing stuff with Maury Povich?’ But this is why. I wanna be like Oprah.”
The Latina bombshell’s inquisitive nature led to her interest in the field. “Talk shows were the original reality TV,” she says. “And I’d love to have real talk with real people. I am a very nosy person. I’m very curious about people’s lives, so I think that will make it interesting.”
Adrienne is currently recording her solo debut for Island Def Jam and will appear on an upcoming episode of E!’s “Kourtney & Kim Take New York.”
Posted by afowzocelebstar