Robin Thicke stays at No.1 with 'Blurred Lines 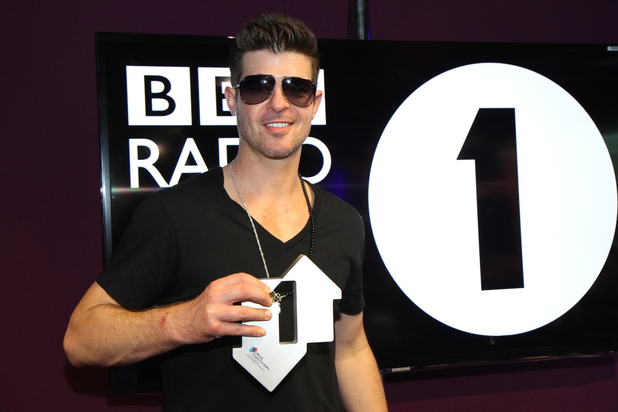 Robin Thicke has stayed at number one in the UK for a second week with 'Blurred Lines'. The Pharrell Williams and TI collaboration has broken its own record for the biggest weekly sales of 2013 so far, shifting a further ...
199,000 copies over the past seven days. The average sales of the number one single over the last eight weeks is now a massive 150,000. The average number one in 2012 had 106,000.

Also, for the last eight weeks every number one single has sold well over 100,000 copies. The last time this occurred without charity records was in late 1999.
Naughty Boy and Sam Smith hold firm at two with former number one 'La La La', followed at three by Daft Punk's 'Get Lucky'. Passenger also stays at four with 'Let Her Go'. Olly Murs climbs one place to five with 'Dear Darlin'', his sixth top five hit. X Factor boyband Union J land at six with their debut single 'Carry You'. Fuse ODG follows at seven with 'Antenna'. Jessie J slips three to eight with 'Wild', while Macklemore and Ryan Lewis are down two to nine with 'Can't Hold Us'. Rudimental also slip two to ten with 'Waiting All Night'. The Voice UK singer Leah McFall scores a new entry at 16 with her take on Gloria Gaynor's 'I Will Survive', after just 24 hours on sale. Afrojack and Chris Brown enter at 21 with their collaboration 'As Your Friend'. Kodaline are new at 22 with 'Love Like This'. The Lumineers climb back five places to 29 with 'Ho Hey', after a huge 34 weeks on the chart.