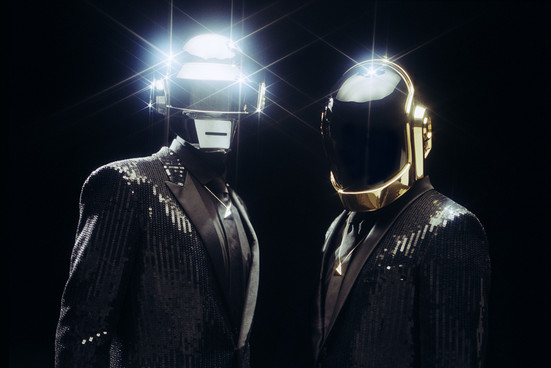 A new remix of Daft Punk's Number One hit 'Get Lucky' has surfaced online. The medley, has been constructed by PV Nova and features snippets of the track from ...
different eras beginning with a crackly 1920s jazz version of the hit before moving into a Buddy Holly-esque 50s version and ending with a futuristic version of the track. It is reminiscent of Gergio Moroder's Daft Punk track 'Georgio By Moroder' on their recent album 'Random Access Memories'.

Meanwhile, the dance duo recently revealed that they are working on a remix of their own for 'Get Lucky'.
The French duo revealed in an interview with Radio 1's Pete Tong that they are remixing a number of songs from the album. "We're working on some mixes ourselves," Thomas Bangalter told Tong. "So, yes, there will probably be Daft Punk mixes of Daft Punk. Usually, we never mix ourselves, that's something we feel we're interested in doing this time. The first track we're remixing is 'Get Lucky'. That will be out by the end of June."
Earlier this week, a picture of the dance duo without their masks was posted on the Facebook page of production duo The Knocks.