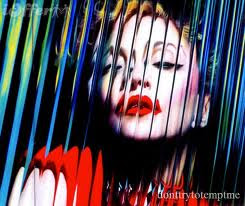 Madonna will be honored with the Top Touring Artist award at the upcoming Billboard Music Awards, an achievement earned by the worldwide success of her MDNA tour. The sold out 88-date run was 2012's top-grossing tour with ...$305 million. It's the pop icon's latest chart landmark in a career full of them, including records for Hot 100 top 10 singles (38 of her overall 56 Hot 100 hits) and Dance Club Songs No. 1s (43). Her "MDNA" album bowed at No. 1 on the Billboard 200 -- her eighth trip to the penthouse -- with sales of 359,000.
The 2013 Billboard Music Awards will air Sunday, May 19 at 8 p.m. ET on ABC, live from Las Vegas' MGM Grand Garden Arena. "30 Rock" alum Tracy Morgan will host, with Don Mischer producing.
Madonna will take the stage to accept her award, with superstars from Prince to Taylor Swift to Lil Wayne set to perform. Other performers joining the ceremony include Nicki Minaj, Bruno Mars, Miguel, Justin Bieber, Pitbull, Christina Aguilera, Selena Gomez, the Band Perry, Macklemore & Ryan Lewis, Chris Brown, Ed Sheeran, Akon, Ne-Yo, David Guetta and Icona Pop.
Along with his performance, Prince is set to be honored with the Billboard Icon Award. Bieber, Swift and Mars are also vying for the Milestone Award, a fan-driven honor that one voter will get to present at the show alongside Cee Lo Green.
Swift, fun. and Maroon 5 top the finalists at the 2013 awards, with each included in 11 categories. Rihanna competes in 10 categories, including Top Artist against Swift, Maroon 5, Justin Bieber and One Direction, while a pair of younger artists -- Carly Rae Jepsen and 1D themselves -- are finalists in nine and eight categories, respectively.
Billboard Music Awards finalists were based on key fan interactions with music, including album and digital singles sales, radio airplay, touring, streaming and social interactions on Facebook, Twitter, YouTube, VEVO, Spotify and other popular online destinations for music. These measurements were tracked year-round by Billboard and its data partners, including Nielsen Entertainment and Next Big Sound.
Stay tuned for more announcements for the May 19 airing of the 2013 Billboard Music Awards on ABC.