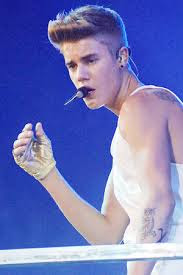 Justin Bieber reportedly threw a temper tantrum during a photo shoot for Elizabeth Arden last weekend.  The 19-year-old star is said to have shown up six hours late and then ...
refused to wear the outfit the organisers chose. An insider said "After showing up six hours late, Justin threw a temper tantrum because they wanted him to wear a bellboy hat which he refused.
"This kid is quickly getting a reputation as someone that no one wants to work with. It was disgraceful."
Earlier this week, he complained about the rumours surrounding him, tweeting: "where do people even get this stuff. whatever...back to the music." i wish u would JB, i wish u would!!!