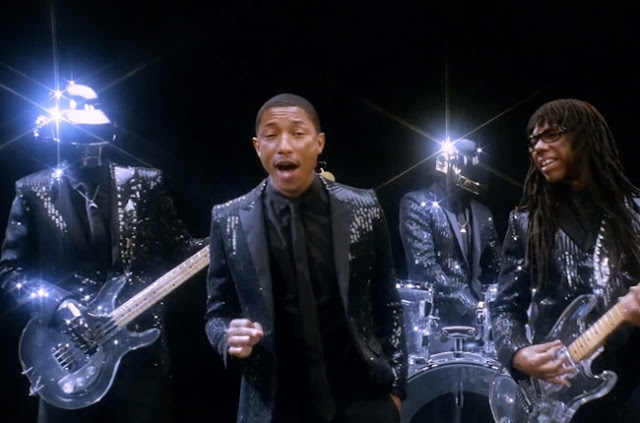 Tastemaker French act Daft Punk racked up the U.K.’s biggest weekly singles sales total for any act in 2013, with 155,000 downloads, to get their first No. 1 in the territory sunday (April 28) with “Get Lucky”  featuring Pharrell Williams. Michael Bublé’s “To Be Loved” sold another ...
46,000 units, according to the Official Charts Company, to start a second week atop the album chart, on which Emeli Sandé had another record-breaking week.

The Daft Punk single had already sold 50,000 units in its first two days on sale (April 19-20) to debut at No. 3 the previous week, and now hits the top as the French act enjoy a huge resurgence in popularity in the U.K. The single, with vocals by Williams and guitar by its co-writer Nile Rodgers of Chic, will be on Daft Punk’s “Random Access Memories” album, which gets its British release on May 20. In advance of that, 2001’s “Discovery” jumped back 66-23 on the new chart, as all of the group’s catalog albums and singles enjoyed sales spurts.
“Get Lucky” knocked last week’s No. 1 single, Rudimental’s “Waiting All Night” (Asylum/Warner Music) featuring Ella Eyre, into runner-up spot, with will.i.am’s “Thatpower” (Interscope/Universal), featuring Justin Bieber, down 2-3. “I Need Your Love” (Columbia/Sony) by Calvin Harris featuring Ellie Goulding continued its progress, 7-4, as did Macklemore and Ryan Lewis’s “Can’t Hold Us” (Macklemore), featuring Ray Dalton, 12-5. There was also a new entry at No. 9 for breakout Syco Music/Sony act the Loveable Rogues with “What A Night.”
Bublé’s second week at the album summit took his two-week sales aggregate for “To Be Loved” to 167,000 units. Emerging English singer-songwriter Frank Turner had his big sales breakthrough week to debut behind him at No. 2 on just under 22,000 sales with “Tape Deck Heart” (Xtra Mile). Will.i.am’s “Willpower” album started at No. 3 on 20,000 sales.
The other big album chart headline was created by Sandé, whose debut album “Our Version Of Events” (Virgin EMI/Universal) dipped 3-5 but spent its 63rd consecutive week in the U.K. top ten, its entire lifespan since its February 2012 release. That beats the Beatles’ 62-week run for “Please Please Me” as the debut album with the longest unbroken top ten sequence in British chart history. “Events” has now sold 1.83 million copies in the U.K.
Calvin Harris’ “18 Months” album also climbed again, 13-8, as did Stereophonics’ “Graffiti on the Train” (Stylus), 16-11. In Daft Punk’s week of triumph, another longtime French act, Phoenix, debuted at a career-best No. 14 with “Bankrupt” (Glassnote/Atlantic/Warner Music). The compilation chart hosted a fifth successive week at the top for “Now That’s What I Call Music! 84” (EMI TV/UMTV/Universal).
Posted by afowzocelebstar