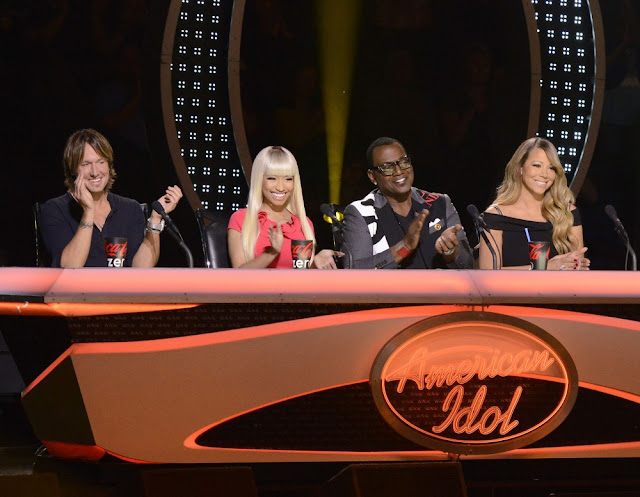 In the heyday of "American Idol," the notion that it could fall ratings victim to a zombie slugfest or standard crime drama would have been laughable. That was then. With Fox's singing contest shedding about 20% of its audience so far this season to hit new lows, it's been leapfrogged repeatedly in total viewers by series including the CBS procedurals "Person of Interest" and "NCIS." In a harsher blow to a blockbuster that once ruled the advertiser-adored young adult segment, "American Idol" has been overtaken this season by...
AMC's "The Walking Dead," despite the addition of glossy new "Idol" judges Mariah Carey, Nicki Minaj and Keith Urban.But in its 12th season, "American Idol" is managing to hit the right notes with sponsors if not always with fickle viewers: It has retained its status as TV's advertising leader among series and the loyalty of its biggest backers, including Ford and Coca-Cola.
"It's still a top 10 show," said Brad Adgate of media-buying firm Horizon Media. "Compared to several years ago, it's not the ratings force it once was. ... But even if it loses 20 percent" again, it's still valuable to Fox.
And there's this confident prediction: When it comes to advertising dollars, the series "will have the top price for the 2012-13 season," said analyst Jon Swallen of Kantar Media. Last season, "American Idol" grossed a leading $836 million in ad revenue. But the trajectory inevitably is headed down.
At the start of the 2011-12 season, "American Idol" was collecting about $500,000 for a 30-second commercial on its Wednesday episodes, said analyst Deana Myers of SNL Kagan. That put it in an exclusive top tier, along with NBC's "Sunday Night Football."
By May 2012, when Phillip Phillips had been crowned the winner, the singing contest had posted its lowest-rated season since it debuted in summer 2002, and "Sunday Night Football" had snatched the No. 1 ratings spot away from singing contest for the first time since 2003.
The result: The current 2012-13 season began with prices cut to $340,000 per spot for the higher-rated Wednesday performance night episode, Myers said. (That figure that is expected to rise as the show heads toward its finale and, presumably, bigger audiences.)
It's true that growing cable competition and the fragile economy have made the broadcast ad market vulnerable. But by comparison, ABC's sitcom "Modern Family" saw its fortunes improve, with its rate of $250,000 per commercial for the 2011-12 season rising to $330,000 at this's season start.
Another test is coming in May. At the annual "upfronts" in New York, broadcast networks will gather billions of dollars in advertising commitments for the 2013-14 season based on their series' past and predicted viewership. In its 13th year, will the "American Idol" share of that bonanza shrink as much as this year's ratings? "You're going to see a significant drop" in May, said Deana Myers of SNL Kagan.
But "American Idol" can claim to be a winner for Fox despite its weakened condition. Yes, "Idol" is averaging about 15 million weekly viewers this year, compared to its 2006 peak of 30 million, according to Nielsen figures.
Yes, the audience's median age has jumped more than 18 years, to 50.4, from season one to last year - meaning that youth-obsessed Madison Avenue is facing consumers more likely to be eyeing retirement funds than a prom date.
And yes, the show's alumni include success stories Kelly Clarkson, Jennifer Hudson and Carrie Underwood, but more recent winners, such as Lee DeWyze and Phillips, have yet to prove themselves as stars in music, movies or elsewhere. "Idol" also faces a crowded talent contest field and younger challengers like NBC's "The Voice." A second, spring edition of that show debuted Monday night and was up 9 percent over its fall premiere with 13.4 million viewers.
But there is value yet to be found in the aging but still sturdy Fox show. Not many shows can draw weekly audiences of 10 million-plus today, given the splintered media world in which broadcast, cable, online amusements and video games clamor for consumer attention.
"American Idol" remains one of them and, given the challenge of keeping younger viewers from hopping to the next big thing, does a credible job of changing up its bells and whistles to keep the fickle engaged.
Reality-show touches, such as housing contestants together during filming, helped freshen the show. This season, exiting judges Jennifer Lopez and Steven Tyler were replaced as Carey, Minaj and Urban, pop stars with presumably younger fan bases, joined mainstay Randy Jackson.
The show's major sponsors appreciate what they are getting. Ford, AT&T and Coca-Cola all returned to the "Idol" fold this season despite the ratings slide. (None would comment on future advertising plans.)
"American Idol" has the right demographics for Ford, and the company's "longstanding collaboration with Fox remains a great thing for us," said Ford spokeswoman Marisa Bradley. "Idol" will help launch a new Ford Fiesta model that's "perfect for the younger generation," she said.
But keeping up appearances for that generation is costly, as the revamped judging panel showed: Fox and producer FremantleMedia North America agreed to pay close to $18 million to Carey, $12 million to Minaj and a reported $6 million take for Urban.
After the show's finale in May determines the fate of contestants, the upfronts will reveal what's in store for "American Idol" itself.
"What will the marketplace determine the value of `American Idol' to be?" said analyst Adgate. "That goes a long way to deciding, from a revenue perspective, what direction Fox wants to take the show," including production costs and the paycheck for judges. Then it's up to the prospective audience to vote.