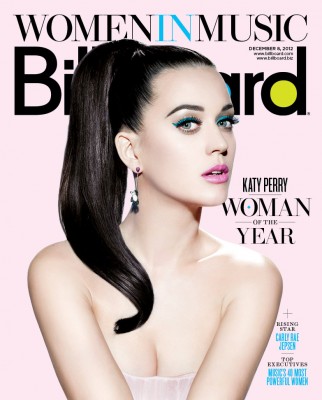 "I am not a feminist, but I do believe in the strength of women," Katy Perry said Friday during her "Woman of the Year" acceptance speech at Billboard's Women In Music 2012 luncheon. "I don't really like to call myself a role model for my fans. I hope that I am an inspiration for them, especially young women. My mantra, especially for the ['Part Of Me'] film, was: If you believe in yourself, you can be anything." That empowering message was felt through ...the room at Capitale, which hosted many of this year's honorees, including Rising Star Carly Rae Jepsen and Atlantic's Julie Greenwald, Billboard's reigning No. 1 female music executive for three years running. But there can always be room for more.
"As we sit here today, over half of the college graduates are female but less than one fifth of the executives in businesses of the Fortune 500 and above are female," said Prometheus Global Media's CEO Dottie Mattison. "We are losing the potential and promise of young women's careers, who are leaving for a variety of reasons. Many of us in this room are old enough to remember a time when it was much worse for young women but are young enough to know that we can…create something better than what we found."
For Perry, some of the most validating career advice she received came from one of her idols, Alanis Morissette. "I used to believe that mystery was [mystique]," the "Jagged Little Pill" phenom recently told Perry, "that there's a time and place to be a star.  But I really think that transparency is the new mystery."
Speaking with "The Daily Show" host Jon Stewart in an onstage Q&A, Perry applied that bon mot one step further to her own relationship with fans. "People don't want to look up to someone. They want to look at across at someone and say, 'That's my girl. She's singing something I don't know how to put into words. She's captured something and became the soundtrack of my life.' And I know that if I get out of line, my sister back home will whack me across the face - and so will my management." 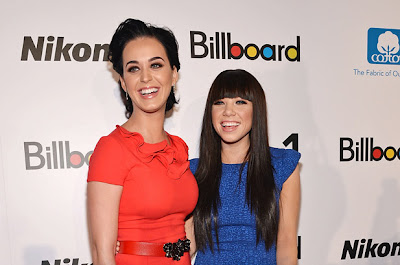 Perry and Jepsen join an illustrious rank of previous honorees such as Taylor Swift, Nicki Minaj, Fergie and 2009's pairing Beyonce and Lady Gaga, who shortly after being recognized by Billboard went on to film the infamous "Telephone" video together. "So Katy and Carly, no pressure," teased Billboard editorial director Bill Werde. The event also doubled as a chance for upcoming talent to show their appreciation. Rising Atlantic country star Hunter Hayes was on hand to pay tribute to his boss Greenwald by performing his hit "Wanted." Epic recording artist Cher Lloyd also popped by to sing an acoustic cover of Perry's "E.T." as well as her own hit "Want You Back."
In fact, it was pop stars like Perry and of course Jepsen's current tour partner Justin Bieber who helped make "Call Me Maybe" Billboard's No. 1 Song of the Summer, spending nine weeks at the top of the Hot 100 and winning her an American Music Award for Best New Artist just last week.
The song made her an overnight sensation in the States, even though she'd been a well-known name in her native Canada since 2007, when she finished third on "Canadian Idol." Speaking To NBC's Natalie Morales onstage, Jepsen says she's learned first hand how the music industry of 2012 is driven less by labels and managers and more by the fans. "The thing we have now is more access to dance parties. I can remember my sister and I falling in love with the Spice Girls and we decided we were able to make our own little dance to it, only we weren't able to share it. Now you can do that. There's easier access to share the love that way." And who's Jepsen's favorite Spice Girl? "Geri," she said without hesitation. "I always thought she was the businesswoman of the group."
In accepting her Rising Star award, Jepsen thanked Brenda Romano, Interscope's president of promotion and Billboard's No. 9 most powerful woman in music, and fellow Interscope execs Jennifer Frommer and Karen Goodman in addition to her Schoolboy Records team as being the women in music who've given her the biggest support. But the most influential women in her life have been her mother and my stepmother, to whom she dedicated her award.
Mary Perry Hudson, Katy's mom, was also shouted out in Perry's Woman of the Year speech as one of the women who've inspired her most in her life, as well as her sister ("for keeping my head above water throughout all the 124 shows of the tour and some of the hardest times of my life") and her cousin ("who just had a baby with no epidural.") Perhaps most inspiring of all was an 11-year-old girl names Jodi DiPiazza, who duetted on "Firework" with Perry last month at Comedy Central's Night of Too Many Stars benefit for autism, hosted by Stewart. "She showed me the true meaning of being a firework, and she inspires me."
Perry was also humbled to share the room with this year's industry honorees - among them Pepsi's Bozoma St. John, whom Perry thanked afterward for sponsoring the premiere concert of Perry's "Part Of Me 3D" in Hollywood (as part of Billboard's Summer Beats concert series) this June. Noting she's met and worked with some of this year's honorees, having previously been signed to Def Jam and Columbia before joining Capitol - and now, post-EMI merger, Universal. "I'm really excited for my new boss, Steve Barnett. I'll keep letting him think he's the boss, anyway," Perry joked of the new Capitol chief.
"I'm very excited to be part of Universal's family," she continued. "I'm really looking forward to my third upcoming adventure with you guys, I just have to let you guys know my Saturn has returned so it'll be ugly. Thank you for this incredible honor and I hope we can all start our cycles together now."
I also cant wait cause if Teenage Dream is anything to go by, album 3 will outrock a lifetime!!!!!
Posted by afowzocelebstar