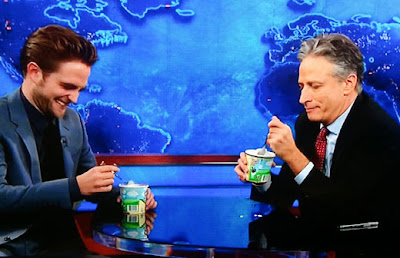 Robert Pattinson gives his first public interview since the cheating scandal involving Kristen Stewart on The Daily Show with Jon Stewart, which aired on Monday night (August 13).
“Welcome, Twilight fans, this is a topical comedy show mostly dealing with ...politics and the media.” Jon said at the opening of the show. “I’m worried about you. Is everything alright?” Jon asked Robert, who wore Gucci.
“Now I’m going to sound like an idiot. But, like, my biggest problem in life is that I’m cheap. I didn’t hire a publicist” Rob said. “And in every awkward interview, normally actors get everything scripted. I’m going to hire a publicist.”
During the interview, Jon brought out Ben and Jerry’s ice cream as a way to console Robert.
“Don’t you think? Listen, the last time I had a bad breakup, Ben and Jerry got me through,” Jon said. So I thought you and I could bond over this and talk about, ‘Boy, you are better off. Kick her [Kristen] to the curb! Whatever. I Like that he is not dwelling on the whole issue (in public atleast) Youll bounce back soon chap