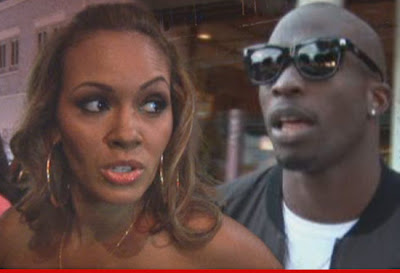 After just 41 days of marriage, Evelyn Lozada has filed for divorce from Chad Johnson (formerly Ochocinco) following a domestic dispute (i earlier talked about).
Lozada – who was allegedly ...
head-butted by the former Miami Dolphins player and Dancing with the Stars contestant – filed for divorce in Florida on Tuesday, claiming her marriage is "irretrievably broken. Johnson, 34, was arrested Saturday night, on a misdemeanor domestic violence charge.
"I would like to apologize to everyone for the recent events that have occurred. I would like to wish Evelyn well and will never say anything bad about her because I truly love her to death," Johnson said in a statement posted to his website Tuesday.
"I will continue to be positive and train hard for another opportunity in the NFL. To all the fans and supporters I have disappointed, you have my sincerest apologies. I will stay positive and get through this tough period in my life."
"It is my sincere hope that he seeks the help he needs to overcome his troubles," Lozada said in a statement a few hours before filing for divorce. "Domestic violence is not okay, and hopefully my taking a stand will help encourage other women to break their silence as well."
Lozada – who was treated for a "pretty good sized" laceration at a nearby hospital over the weekend, according to a report – costarred with her ex on VH1's Basketball Wives, and was planning to star with him on Ev and Ocho, which has been canceled by the network since news broke of the alleged incident. Evelyn Needs rows of seats! the Dumb hoe is gonna go upstaging rihanna now! please #rest (i dont condone whatever transpired between them that caused that head butt but for the love of all things good, evelyn chill!!!)
Posted by afowzocelebstar