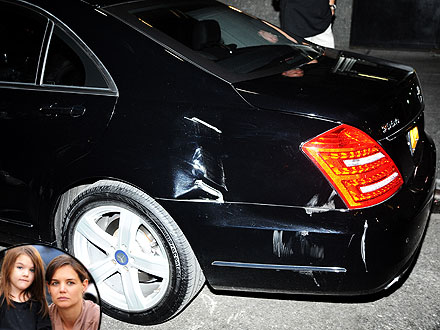 Nearly three weeks after filing for divorce from Tom Cruise, life in New York City isn't without a few bumps in the road for Katie Holmes – literally. The Mercedes she was traveling in with daughter Suri, 6, was hit by a garbage truck Monday night, police confirm. No one was injured.
The mother-daughter duo were ...
leaving the Chelsea Piers recreational center – not far from their new Manhattan apartment – when a turning garbage truck rammed into their Mercedes, according to a source.
"Suri was crying in the car," says the source, who adds that Holmes, 33, was not driving.
Once Holmes and her daughter were back home, a police report was filed. This is the second time their car has been hit in four days. Last Friday, a paparazzi car hit their vehicle as they were pulling home after a trip to the FAO Schwarz toy store.
Still, life in N.Y.C. doesn't seem to be slowing down for Suri and Holmes, who was granted primary custody of her daughter, according to sources. The two have been photographed shopping at pet stores, feeding alpacas at the Central Park Zoo and enjoying an icy treat in between.
Posted by afowzocelebstar