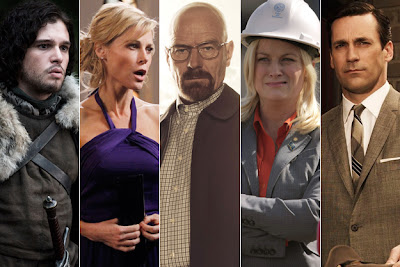 Nominations for the 64th Emmys were announced today, and noticeable among the long list of nods for "Mad Men," "Modern Family" and "American Horror Story" was a striking lack of nominations for "Glee," "American Idol" and "The X Factor." "The Voice" scored a top nod, however, and "Smash" saw several nominations in its inaugural season.
It's already been a rough year for "Glee," and the blows just keep on coming. On top of the Fox comedy series' falling ratings, this marks the first year since "Glee" first aired that it has not been nominated for Outstanding Comedy Series at the Emmys. In fact, in comparison to the show's 19 nominations in 2010 and 12 nominations in 2011, "Glee" received only three this year. In 2010, the show took home four trophies, and in 2011, it won two.
This year, "Glee" sees nominations for Outstanding Cinematography and Outstanding Makeup for a Single-Camera Series, plus Dot Marie Jones (Coach Beiste) is nominated for Outstanding Guest Actress in a Comedy Series, for the second year in a row.
Also lacking in nominations are Fox's reality singing competition shows, "American Idol" and "X Factor." While the former earned three nominations -- for Outstanding Lighting Design/Lighting Direction for a Variety Series, Outstanding Sound Mixing for a Variety Series or Special, and Outstanding Host for a Reality or Reality-Competition Program (Ryan Seacrest) -- the inaugural season of "X Factor" was not nominated at all.
NBC, meanwhile, saw success with its singing competition, "The Voice," which received a nod for Outstanding Reality-Competition Program, along with nominations for art direction, hairstyling, and lighting.
The network's new Broadway-inspired "Smash" garnered four nominations for its first season, including Outstanding Choreography, Outstanding Music Composition for a Series, Outstanding Original Music and Lyrics, and Outstanding Guest Actress in a Drama Series for Uma Thurman's performance as Rebecca Duvall.
Among the other nominations were She & Him singer/actress Zooey Deschanel (Outstanding Lead Actress in a Comedy Series - "New Girl"), Tony Bennett's "Duets II" PBS Special (Outstanding Variety Special), Lionel Richie's AMC-presented concert special (Outstanding Sound Mixing for a Variety Series or Special), and the Grammy Awards (Outstanding Sound Mixing for a Variety Series or Special).
"Glee" creator Ryan Murphy saw a stunning number of nominations for his other show, "American Horror Story," which airs on FX and scored 17 nods for its first season, competing as a miniseries. After the announcement, Murphy sounded a positive note on his mixed day.
"You can't be excited about the ones that you get and then turn around and say, 'But what about what I didn't get?' I choose to look at the glass as half full," Murphy told The Hollywood Reporter, adding, "I have nothing bad to say about anything; I just feel grateful for what I got and happy for Dot."
The 2012 Emmys, hosted by Jimmy Kimmel, air Sunday, Sept. 23 at 7 p.m. ET on ABC.

Writing for a Miniseries, Movie or a Dramatic Special
Game Change
Hatfields & McCoys • Part 2
The Hour
Luther
Sherlock: A Scandal in Belgravia

Host For A Reality Or Reality-Competition Program
Phil Keoghan, The Amazing Race
Ryan Seacrest, American Idol
Betty White, Betty White’s Off Their Rockers
Tom Bergeron, Dancing With the Stars
Cat Deeley, So You Think You Can Dance