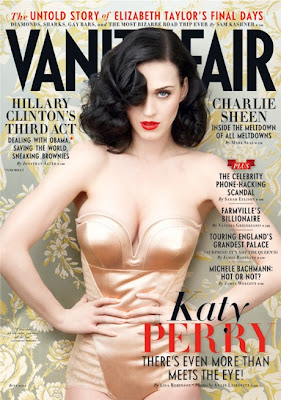 Why is Katy Perry so Elegant? if you havent noticed, even when she tries to look stupid and funny, theres this effortless 60's glam that emanates from her and on the cover of Vanity fair, its no different! in the magazine she talks about ...
fame and her parents plus the connections and differences shared by both parties and how they agree to dissagree on everything!
[from Vanity Fair] “I didn’t have a childhood,” she says, adding that her mother never read her any books except the Bible, and that she wasn’t allowed to say “deviled eggs” or “Dirt Devil.” Perry wasn’t even allowed to listen to secular music and relied on friends to sneak her CDs. “Growing up, seeing Planned Parenthood, it was considered like the abortion clinic,” she tells Robinson. “I was always scared I was going to get bombed when I was there…. I didn’t know it was more than that, that it was for women and their needs. I didn’t have insurance, so I went there and I learned about birth control.”

“I think sometimes when children grow up, their parents grow up,” Perry says of her evangelical-minister parents. “Mine grew up with me. We coexist. I don’t try to change them anymore, and I don’t think they try to change me. We agree to disagree. They’re excited about [my success]. They’re happy that things are going well for their three children and that they’re not on drugs. Or in prison.” Perry’s mother confirms that she is proud of her daughter’s success, telling Robinson, “The Lord told us when I was pregnant with her that she would do this.”
There you have it. She was born to do what shes doing and know that we'r all rooting for you babes! keep firing those fireworks and dreams our way
Posted by afowzocelebstar