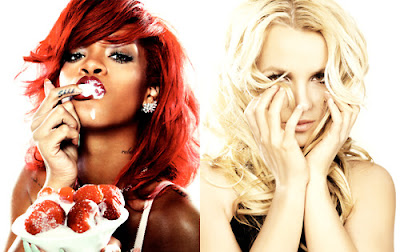 As if Rihanna and Britney Spears‘ ‘S&M’ remix wasn’t comical enough, the red-haired star has hit out at suggestion that Spears sounded “nasally” on the track. How ironic.
While calling in to 92.3 NOW FM to promote the collabo, she was ....
bluntly informed by host DJ Lil Cee that masses aren’t feeling Spears’s contribution to the record – regardless of its iTunes standing.

i, at first tot there was something off bout it but it finally makes sence at the end cause u can tell britney put her all, especially in the climax but if some peeps feel otherwise, Kudos to the interviewer for keeping it real. Now if only he’d told Ms. Fenty she sounded like a cat being skinned, we’d really be on the same page.
Posted by afowzocelebstar