Miley Cyrus Shows Off Her Newest Tattoo On Twitter 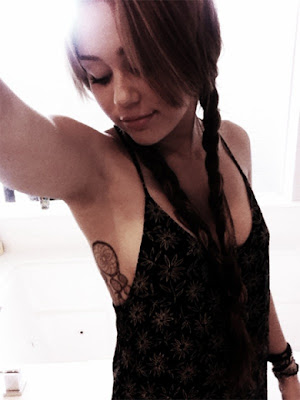 Miley Cyrus tweeted on Sunday, "Rocking piggy tails for the first time since like 6th grade! I love summer time," and posted a pic of her middle school hairdo. But we have a sneaking suspicion that the "Can't Be Tamed" singer just wanted to ...
give everyone a little peek of that tattoo she got back in February. Up close, we can now see that thing is definitely not temporary.

Cyrus' dream catcher tattoo is reportedly a replica of the very one that hangs over her bed, and the four feathers represent her brothers and sisters. Aww! That's super nice and everything, but we were kind of wondering how many more tattoos Miley is planning on getting. The 18-year-old already has five of them, and it doesn't look like she's slowing down any time soon.
So maybe the tattoo is dedicated to her family -- and that's great -- but what if it's just another step Miley is taking to officially morph into Fleetwood Mac's Stevie Nicks?! That's our theory. If we start seeing you in capes, Miley, we might need to stage an intervention!
Posted by afowzocelebstar