Is This Beyonce's 'Girls (That Rule The World)' Promo Photo? 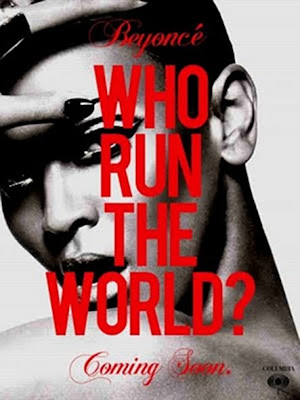 Well, hel-lo! Or should we say "Ha-lo?" What may be a new promo photo for Beyonce's next song has hit Twitter, and the web is officially abuzz. Although the photo's mostly smoke and mirrors (and shadows and lipstick), Beyoncé looks like she's channeling Grace Jones while still living up to the last name of her alter ego, Sasha Fierce.

The photo appears to promote her new ladies' anthem, "Girls (That Rule the World)."
With that weird shoot at a sleazy motel in New Jersey (seriously) and her Gladiator-style video shoot, Beyoncé has left us ...
desperate for more because she looks sicker than ever. All's quiet on Beyoncé's official site. Beyoncé, why don't you love me?? More photos, song snippets, ANYTHING PLEASE! We're waiting with B-ated B-reath for Beyoncé's next move and new album, which may come out in June. Oh yeah, and if it's true that Beyoncé and Jay-Z and possibly KANYE will perform together at Glastonbury in June, then we may have to book a ticket, like, yesterday. (if we could make it fro nigeria! lol)
Posted by afowzocelebstar