Did Lady Gaga Kick a Drunk Adam Lambert out of her Birthday Party? 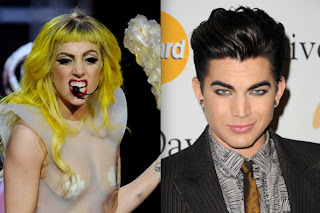 On Monday, Lady Gaga celebrated her 25th birthday with a relatively intimate bash at Los Angeles' La Cita bar. By all accounts, the pop superstar had a blast, even taking to the stage at one point to join mariachis in an impromptu version of her new hit "Born This Way." But there was at least one guest who might have worn his welcome: former American Idol contestant Adam Lambert.

Gossip blogger Perez Hilton explained on a morning radio show that Adam, who was not exactly on the invite list, .....
"showed up beyond drunk" to the party, and quickly found himself jumping on tables and attempting to smear birthday cake in Gaga's face.
Some accounts have Adam getting kicked out by security, but a source told E! News that wasn't true.
Adam admitted he wasn't on top of his game, tweeting, "Was trying for celebratory gesture 4 gaga's B- piñata style...instead my fist is all bruised and la cita has a hole in the ceiling. #sloppy."
Posted by afowzocelebstar