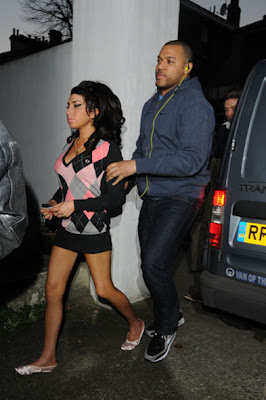 Guess who still looks like Amy Winehouse! Amy Winehouse! The English phenom was spotted as she headed to the Abbey Road Studios in London to see Taylor Swift perform. One might not necessarily expect the former bad girl (and popular Halloween costume) to show support to America's most pristine pop-country superstar, but Amy Winehouse was
anything but predictable.

Wearing her "favorite" sweater dress and the ballet flats she loves so dearly, Amy Winehouse, who did the Snooki poof before it was the Snooki poof, took a more relaxed approach to her hair, but the rest of her body was on full display, including those famous legs -- now a shade of tan you don't regularly see across the pond, considering it's always raining, right? Isn't that why they call it "London Fog"?
We last heard Amy Winehouse was working on an album in summer of 2010 to be released January 2011. But sadly, we haven't seen that come to fruition, except for her masterful cover of "It's My Party." When it comes to blue-eyed soul in the UK, it seems like Adele's got the stronghold right now, but there's room for everybody, including our beloved Amy. Don't forget about us, Amy
Posted by afowzocelebstar