Robert Pattinson Calls Justin Bieber Out on a Lie 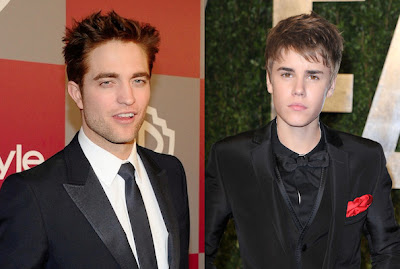 You might think Robert Pattinson and Justin Bieber are brothers in much-beloved hair, but it appears it just isn't so.

Bieber recently told UK tabloid The People that he and Pattinson ...
bonded at an industry party over their famous locks, saying, "One day Robert Pattinson came up to me at a party and said, 'For whatever reason, people love our hair and it's always a great ice-breaker with girls.'"
"He is like, 'Hey, my name's Robert. Want to touch my hair?' I thought he was joking, but it really works."
Now Pattinson, who is hard at work promoting his upcoming film Water for Elephants, says that encounter never happened. He told MTV (via EOnline) on Friday, "I've never met this guy. I saw that as well. I was like, 'You're really famous, man—what are you doing? You don't need to use me to make up stories!"
Maybe Bieber was just embellishing for the sake of avoiding talking about his private life. Which is something you'd think Pattinson would understand, given the constant speculation about his relationship with his Twilight co-star Kristen Stewart. Ouchhhhh! Bieber u need maturity! your a celeb, no need for name dropping!
Posted by afowzocelebstar