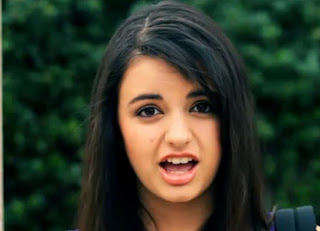 This is soooooo amaizing! you cant begin to phantom this new revelation! hahah! just watching all the critc video's alone would cause you to have pity on Rebecca! One week ago, Rebecca Black was just a regular teenager, dreaming of one day making a meteoric rise to superstardom. A week later, everyone on the internet knows who she is, thanks to her music video, "Friday," which is approaching... (watch the video inside)
22 million views on YouTube.
Since Monday, when "Friday" really began to go viral, Rebecca Black has been a soaring Twitter trending topic -- even replacing Twitter warlock Charlie Sheen! (who i chose not to blog about cause i absolutely love the dude on "2 & a half men") -- and the subject of countless parodies. Even Chris Brown admitted to watching her video with his jaw on the floor, just like the rest of us.
The sudden, frenzied attention would seem like a dream come true, but in two new interviews with "Good Morning America" and The Daily Beast, Rebecca Black says that her "Friday" video has made her the victim of cyberbullying.
“I decided not to give the haters the satisfaction that they got me so bad I gave up,” Black told The Daily Beast. “I want to show people there’s more to me than they think."
We salute your positive attitude, Rebecca! but i gotta admit, girl! the song was one of the most oddly ispired downhill trash iv heared but i just cant stop listening to it (oddly enough! lol)Haters gonna hate, but with "Friday" already creeping into the Top 100 on iTunes, it seems the joke's on them.
PS. is it just me, or does she sound alot like Queen Trailer Trash, Ke$ha!(na me love u pass oh!!!!) Watch the video below