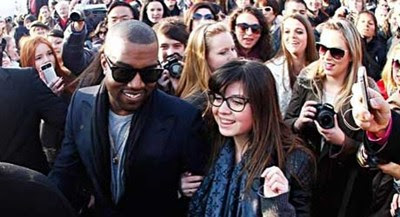 When Kanye West got turned away from Paris fashion shows last week, we waited for the inevitable explosion, for Yeezy's newest dozen-tweet rant.

It never came. Our curiosity climbed. Then Kanye tweeted about Paris Fashion Week, and it was no kind of tirade; it was a happy photo of himself and a bevy of fans [above], simply tagged "photo from paris last week." What's going on here? Is Kanye West actually, seriously, finally growing up?
The fact that Kanye West is an artist of great merit is indisputable (sorry, haters -- just own it). Another truth -- evidenced by 'Ye's line "my life is like a child's illusions become reality" on a B-side to 2010's ubiquitously praised 'My Beautiful Dark Twisted Fantasy' -- is that Kanye isn't the most mature guy out there.
Anyone compiling a roundup of Kanye's childish behavior has plenty of fodder: In the last few months alone, West ticked off Lily Allen with a tweet about abortion, possibly ripped off the video concept for 'All of the Lights,' bravely held back a full-on tantrum on the 'Today' show and apparently staged his whole "they banned my album cover, WTF!" controversy. And, of course, Taylorgate. Never forget.
This time, Kanye, the self-proclaimed Louis Vuitton Don, impressively stayed tight-lipped about the Paris Fashion Week snub. Alone, that feat may not have been so commendable. But take February into consideration, when Justin Bieber lost the Best New Artist Grammy to relatively unknown jazz bassist and singer Esperanza Spalding. Kanye seemed on the cusp of another rant.
Not only did Kanye not say the wrong thing -- he didn't say anything. Whether Kanye would have defended Bieber -- who he had a brief Twitter bromance with, resulting in a remix of 'Runaway Love' -- or continued his long spree of speaking out on behalf of black America (see: "George Bush doesn't care about black people"), we never found out. Kanye kept quiet.
Now Idolator reports 'Ye will join a stacked lineup at South by Southwest festival in Austin, Texas, this week. The performance could be a good first step to erasing a bad festival experience at Bonnaroo in 2008, when Kanye kept attendees waiting until 4AM to see a lackluster, thankless performance. It could also be a good warm-up for Kanye to headline another massive festival, Coachella, in April. Boombox wrote that the three-day fest's $319 tickets sold out in record time and speculated that Kanye may have had something to do with it. PopEater wondered if Kanye would be ready for Coachella after tarnishing Bonnaroo in '08 and ruining the VMAs in '09. Now my fingers are crossed that the April 17 gig at Coachella marks the debut of an increasingly adultlike Kanye West or .... !
Posted by afowzocelebstar