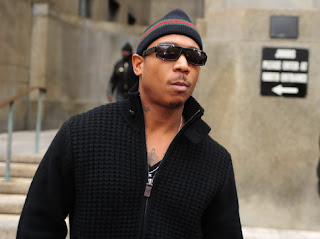 Ja Rule is headed for more “Rainy Days.” The embattled rapper, who is currently scheduled to begin serving a two-year sentence in June, pleaded guilty to federal tax evasion in New Jersey, admitting that he.... failed to pay taxes on more than $3 million earned between 2004 and 2006.
The 35-year-old MC entered his guilty plea yesterday in Newark, which resulted in two counts against him to be dismissed for unpaid taxes from 2007 and 2008. He will be sentenced on his tax evasion charges in June.
That same month, the Grammy nominee will begin his two-year jail term after pleading guilty to attempted weapon possession. The sentence stems from an arrest in 2007 made after police discovered a loaded gun in his car following a performance at NYC’s Beacon Theatre.
He will spend his remaining free months finishing his next album The Renaissance Project. my heart goes out to the first mc i really was in sync with! you get over it and then the sky is the limit!
Posted by afowzocelebstar