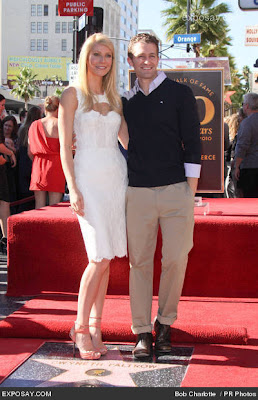 Thanks to Glee, Country Strong, and Cee Lo Green, Gwyneth Paltrow's music career is gaining serious traction, and now she's set to duet with her Glee crush Matthew Morrison on his new solo album. Morrison revealed to Entertainment Weekly that following several guest appearances on the hit Fox show, he and Gwyn have recorded
a duet of "Over the Rainbow."

Morrison auditioned for Glee with the Wizard of Oz classic and sang it on the first season's finale.
“People kind of know me for that song now,” he said. “I wanted to do a duet with a female. I thought that was a good song to do, and we really did a different arrangement of it. It’s a lot of strings, and it’s beautiful.”
Elton John also appears on the album, which is due out May 10. Morrison told EW it wasn't the singing that had him nervous about recording the music.
“The hardest part of doing this album was asking these people favors, like Elton [John] and her,” he said. “I’m so not that guy.”
Gwyneth is set to reprise her Glee role as Holly Holliday for a third time on April 19.
Posted by afowzocelebstar