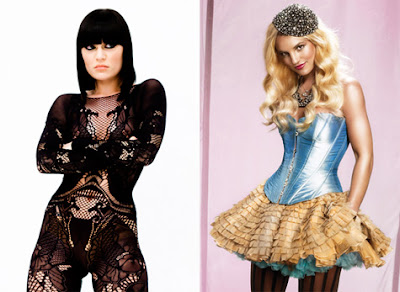 Jessie J -- we told you about her back in January -- wrote a song called "Being Britney" for Britney Spears' upcoming album, Femme Fatale. Sadly,
it didn't make it onto the album, which has already leaked virtually every song and photo. After tweeting that she was writing the song, blogger types ran with the story, cementing the notion that British import Jessie J (whose star is already on the rise with her upcoming album Who You Are, and its lead singles "Do It Like A Dude" and "Price Tag") had made the cut, although it's never quite that simple, she explains.

"To have the opportunity to write a song for [Britney] is incredible," Jessie J told MTV. "As a songwriter, I'm still taking baby steps. You have to write 10 songs to get one good one and, realistically, I don't have time to write 10."
Considering the fact that Jessie J penned the delightfully inescapable "Party In The U.S.A" for Miley Cyrus chances are the lost Britney song would've been a hit. In fact, Jessie J may try to pitch the song to someone else, although, admittedly, it would be kind of weird if, say, Ke$ha sang a a song about "being Britney." Whatever. We'd still be into it.
Posted by afowzocelebstar