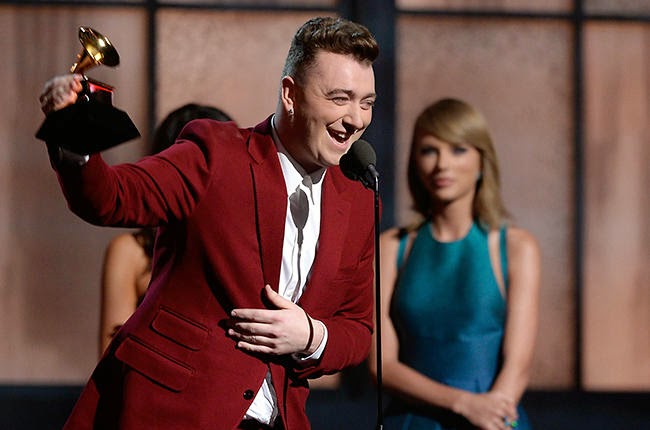 Sam Smith was the big winner at the 2015 Grammys, taking home four awards for best new artist, best pop vocal album, record of the year and song of the year.
In an upset (but I kinda guessed it would go that way), Beck took home album of the year for Morning Phase, beating out Beyonce's Beyoncé. The show itself was really good; I especially loved the performances by Pharrell, Gwen Stefani and Maroon 5, Rihanna, Beyoncé (although I would have loved to see Ledisi perform), Madonna, AC/DC, Usher and Lady Gaga and Tony Bennett. That Joke Kanye tried to pull on Beck was not funny at all nor was it appropriate Plus I feel the biggest snub was Sia, She at least deserved Best Music Video.
Check out the full list of winners below.
Grammys 2015: See All of Our Coverage

Song of the Year
"Chandelier," Sia
"All About That Bass," Meghan Trainor
"Shake It Off," Taylor Swift
"Stay With Me (Darkchild Version)," Sam Smith -- WINNER
"Take Me to Church," Hozier

Best Compilation Soundtrack for Visual Media
American Hustle
Guardians of the Galaxy
Frozen -- WINNER
Get On Up: The James Brown Story
The Wolf of Wall Street

Best Reggae Album
Fly Rasta, Ziggy Marley -- WINNER
Back on the Controls, Lee "Scratch" Perry
Full Frequency, Sean Paul
Out of Many, One Music, Shaggy,
The Reggae Power, Sly & Robbie & Spicy Chocolate,
Amid the Noise and the Haste, Soja