Red Hot Chili Peppers Bassist On Miming Super Bowl: 'I Would Do It All The Same' 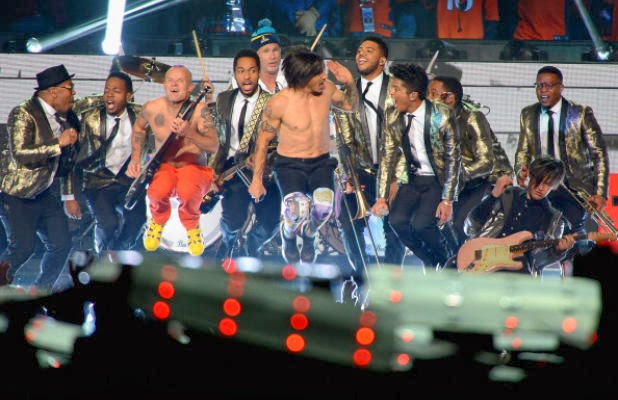 While the Red Hot Chili Peppers were on fire when they joined Bruno Mars onstage during the Super Bowl halftime performance, fans couldn't help but notice that something was undeniably off about their rendition of "Give It Away" on Sunday night. And, as bassist Flea confirmed in a lengthy letter on Tuesday (February 4), something was: their guitars — and they weren't any less disappointed than you were.
As he explained in a post on the band's website, the NFL had told the Peppers long before they hit the stage that they would ... 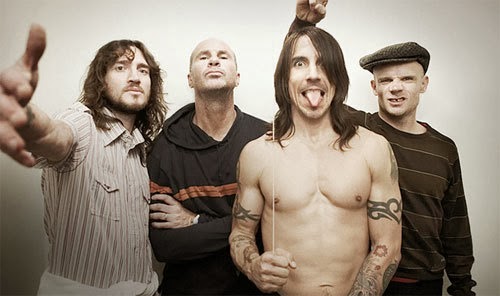 not be able to play their drum, guitar and bass live. Anthony Kiedis' vocals were live, but Super Bowl organizers only had "a few minutes to set up the stage," adding that "a zillion things" could have gone wrong in the setup. So instead, the guys pre-recorded the track and didn't bother plugging in for appearance's sake — "we thought it better not to pretend," he explained — and, as expected, the world definitely noticed.
"There was not any room for argument on this, the NFL does not want to risk their show being botched by bad sound, period," he wrote. "The Red Hot Chili Peppers stance on any sort of miming has been that we will absolutely not do it. The last time we did it (or tried to) was in the late 80's, we were thrown off of 'The Top Of the Pops' television program in the U.K. during rehearsals because we refused to mime properly, I played bass with my shoe, John played guitar atop Anthony's shoulders, and we basically had a wrestling match onstage, making a mockery of the idea that it was a real live performance."
And even though the California-bred rock group are vehemently anti-miming, after going back and forth among themselves and consulting fellow musicians, they decided that, in the end, a Super Bowl performance is "a surreal-like, once in a life time crazy thing to do."
"I spoke with many musician friends for whom I have the utmost respect, and they all said they would do it if asked, that it was a wild trippy thing to do, what the hell. Plus, we the RHCP all love football too and that played a big part in our decision," Flea explained. "We decided that, with Anthony singing live, that we could still bring the spirit and freedom of what we do into the performance, and of course we played every note in the recording specially for the gig. I met and spoke with Bruno, who was a beautiful dude, a real talented musician, and we worked out something that seemed like it would be fun.
It's fairly common for musicians to pre-record vocals for such high-profile gigs -- even Jennifer Hudson and Faith Hill lip synched back in 2009 — but there haven't been any high-profile accusations of halftime performers pantomiming guitar and drums.
"I am grateful to the NFL for having us. And I am grateful to Bruno, who is a super talented young man for inviting us to be a part of his gig. I would do it all the same way again," Flea wrote. "We, as a band, aspire to grow as musicians and songwriters, and to continue to play our guts out live onstage for anyone who wants to get their brains blown out." well said if i do say so myself!!!!
Posted by afowzocelebstar