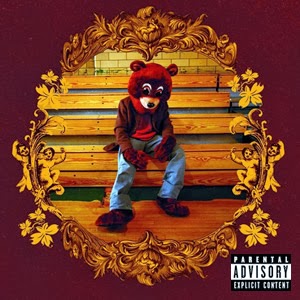 Hi everyone!!!! i came across this article and i loved it so so much cause if i can remember all too well, "College Dropout"was the best hip hop album in my mind for a couple of years even after its release! tho Kanye may be very missunderstood, you could definitely see the elemants of a legend in the making on that record (the same way i feel about "Good Kid m.a.a.d City"). enjoy the peice here.

"College Dropout" is the story of and for the underdog, the underachiever. Still is, ten years after its release (February 10, 2004).

Kanye West fought for recognition when he was 12-years old, and still thirsts for respect today. He survived a car accident that nearly killed him, but instead motivated him, and strengthened the necessity to jump on tables to prove his talents and fight stigmas that come with being a rapper/producer and a brutally honest, emotional backpacker.

Kanye's first studio album, "The College Dropout," continues to resonate in pop culture 10 years after its release, not only because of Kanye West but all of those who were a part of the creation. Everyone who contributed was an underdog as well, trying to prove themselves to their hometown, label executives, peers, and most importantly, themselves.

Everyone involved – Kanye West, those he grew up with him in Chicago (GLC, Coodie, Chike,  Really Doe, Oldskool Ice-Gre, JB Marshall), those who he met at the latter end of the album's development to those who in the thick of it all – were so hungry to achieve something that they became one unit. One family, one machine, with the goal to kick down doors and brighten Kanye West's future. Even as everyone moved on to fulfill their own ambitions and dreams, "The College Dropout" was in the pit of each of them.

In celebration of Kanye West's "The College Dropout," here are the stories of 26 contributors – "The Good, The Bad, The Ugly" – who were involved in the making of the album, and more importantly, became instrumental to Kanye West's career.