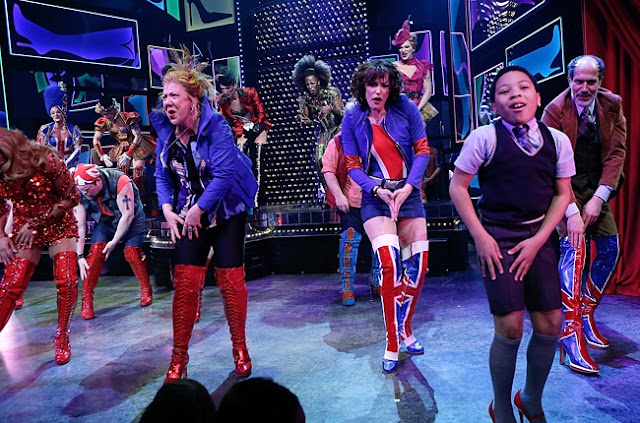 "Kinky Boots" will be kicking up its glittery heels in Las Vegas. Following its triumph at the Tony Awards on Sunday night, taking home six trophies including best new musical, the Broadway production has announced plans to launch its first national tour in Sin City in September 2014.
In addition to the top prize, "Kinky Boots" also landed Tonys for Cyndi Lauper's ...
original score (marking the first time a woman had secured a solo win in that category), for lead actor Billy Porter and for director Jerry Mitchell's choreography, as well as for orchestrations and sound.

Adapted by Harvey Fierstein from the 2005 Miramax movie of the same name, "Kinky Boots" is about a British shoe factory on the verge of bankruptcy that finds its feet by diversifying into the niche market of making thigh-highs for drag queens. The show was nominated in 13 Tony categories.
Even prior to its awards haul on Sunday, "Kinky Boots" chalked up its best week to date, grossing north of $1.4 million at the Al Hirschfeld Theatre for the week ending June 9. Reps for the production say ticket sales the day after the Tonys totaled a hefty $1.27 million, with each performance now playing to standing room only. The New York Times reported on Monday that the show's advance sales have hit $10 million.
The Broadway production began previews on March 3, with an official opening on April 4. It has chalked up a cumulative gross of $15 million to date, which is expected to climb rapidly as Tony momentum propels the show into the tourist-trafficked summer season.
Further details of national tour plans are expected at a later date. Lead producers on the Broadway staging are Daryl Roth and Hal Luftig.
Posted by afowzocelebstar