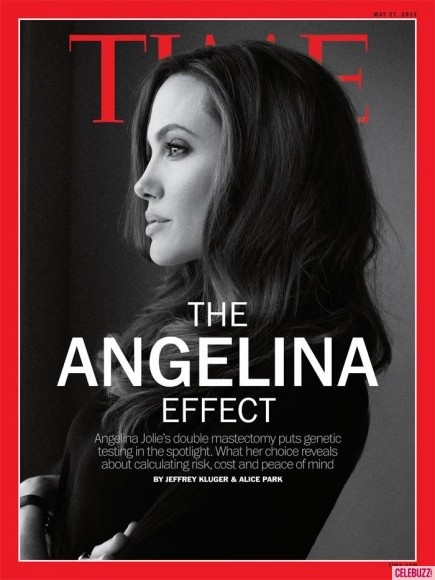 TIME is summing up Angelina Jolie’s big week with three words on the cover of its latest issue: “The Angelina Effect.” The powerful cover image was revealed on Wednesday, one day after the Oscar winning actress revealed that she had a preventative double mastectomy earlier this year. According to TIME spokesperson Kerri Chyka, the photo was ...
taken before Jolie’s surgery in February. [via Poynter]

The magazine’s cover story focuses on how far the star’s influence has gone in past cases: her adoption of a baby (her daughter Zahara) in Ethiopia and her name choices for daughter Vivienne and son Maddox. Now, with Jolie's actions, doctors are expecting a "stampede of women" who will request to be tested for the breast cancer-related BRCA1 gene.
“I wanted to write this to tell other women that the decision to have a mastectomy was not easy. But it is one I am very happy that I made. My chances of developing breast cancer have dropped from 87 percent to under 5 percent. I can tell my children that they don’t need to fear they will lose me to breast cancer,” Jolie wrote in her New York Times op-ed published on May 14. i think its brave and out of this world!
Posted by afowzocelebstar