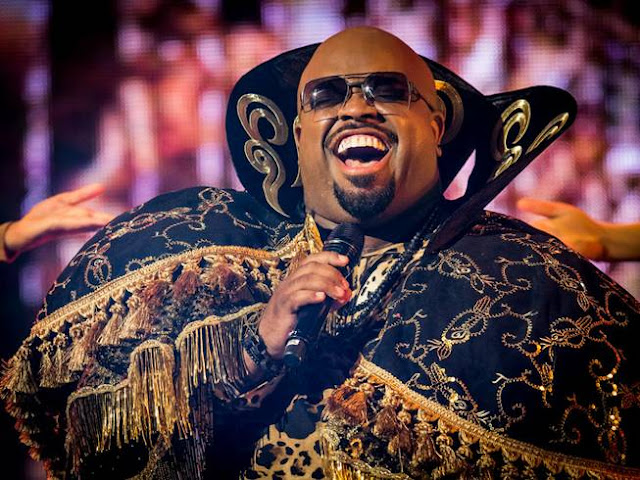 From selling millions of records and success on a prime time singing competition to his Las Vegas show and various other projects, it’s safe to say that CeeLo Green is a certified headliner. Born Thomas DeCarlo Callaway, the ‘Run’ singer has gained success with groups such as Goodie Mob and Gnarls Barkley as well as a solo career and collaborative work with other artists. So in honor of his 39th birthday on May 30 (today), i'm treating you to a lesson in all things about the ever-smiling entertainer. From random acting gigs and collaborations to who his last landlord was, here are 10 Things You Didn’t Know About CeeLo Green.

On the second season of 'The Voice,' we said goodbye to his feline friend, Purrfect, and welcomed a new pet -- a pink cockatoo named Lady. While it wasn't too surprising to see him do something that eccentric, it didn't sit too well with many animal rights activists. Organizations like Born Free strongly suggested CeeLo let go of Lady because of the stress the studio environment would cause the creature.

9
He acted alongside Ben Stiller and William H. Macy.

It may seem that CeeLo is all over the big and small screens. But you probably didn't know that he was in the 1999 superhero comedy, 'Mystery Men,' starring Ben Stiller and William H. Macy. Along with his fellow Goodie Mob members, the group made a cameo in the film as the "Not So Goodie Mob" (how original). If you've seen the movie but don't remember Green's presence, it might be because he was in full costume for the role.

8
CeeLo was a bit of a regular on 'Adult Swim.'

Various stars like the Jackson 5 and Destiny's Child have gone the animated route in the past. And CeeLo isn't one to snub the idea to get his creativity out there and made a number of appearances on The Cartoon Network's 'Adult Swim.' In 2002, he played Prime Cut on 'The Brak Show.' And from 2007 to 2008, Green had become the voice for a number of characters on 'Robot Chicken' and brought life to Rev. Rollo Goodlove on 'The Boondocks.'

7
He showed his explicit side at an Obama campaign fundraiser.

Between his demeanor and fashion decisions, it's obvious that CeeLo likes to push the envelope. And he decided to see how far he could do it at a political event. During a campaign fundraiser for President Obama last year, the rapper asked the crowd if he was allowed to curse at the event. But before anyone could respond, he belted "F--- You" on the mic, signaling the start of his hit song. After doing that, he switched over to the clean version as to not offend anyone, if he hadn't already.

6
The rapper was honored for his creativity and business savvy.

Aside from his music-making and judging duties, he is an entrepreneur. While he may not necessarily own a company per se, Green was named one of Fast Company's 'Top 100 Most Creative People in Business 2012.' Not only did he make the list, but he also was on the cover of that issue. In addition, he was the only entertainer to make it to the top 10 -- being looped in with execs from Starbucks, Nike and American Express.

In 2005, Sierra, CeeLo's stepdaughter with then-wife, Christina Johnson, was one of the featured girls on MTV's 'My Super Sweet 16.' Although she was actually only turning 15 on the show, her famous stepdad, who appears in the episode, didn't hold back and made sure she arrived at her party via helicopter, had a Louis Vuitton cake and received a special greeting from Bow Wow.

4
The entertainer is a grandpa.

Although he's only 39, the 'Ladykiller' singer is not only a dad but also a grandfather. His stepdaughter gave birth to a baby boy in 2010, making him one young grandparent.

3
He collaborated on Santana's 'Supernatural.'

Santana's 1999 LP, 'Supernatural,' is probably one of his most well-known albums to date and became one of frontman Carlos Santana's best-selling LPs, going 15 times platinum. CeeLo was among the many talented artists to become part of the album. He and Lauryn Hill teamed up with the band for 'Do You Like the Way.' Although the collaboration didn't necessarily go well with critics, it was one not too many people expected.

When they were just schoolkids, CeeLo, Andre 3000 and Big Boi all knew of each other. Some reports said that Andre and Green were friends while others reported that the OutKast members claimed CeeLo was a bully. Either way, Big Boi admitted in an interview that there was some talk of Green joining their team. However, as the story goes, he joined Goodie Mob instead.

1
Frankie Muniz was his landlord.

In Hollywood, it's not how old you are but how much money you've got. At least that's what CeeLo faced when he decided to rent the Beverly Hills home of 'Malcolm in the Middle' star Frankie Muniz. In 2011, for $10,000 a month, the 'Bright Lights in a Big City' singer leased a five-bedroom, four-bathroom home, which also included a pool, spa and outdoor fireplace. He only lived in the pad for a few months as it was back on the market later that year.
Posted by afowzocelebstar