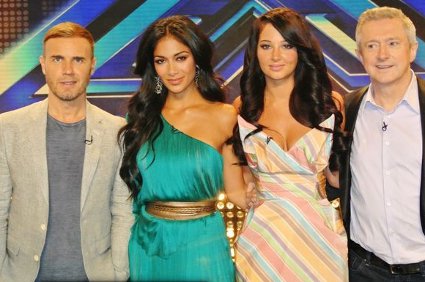 The X Factor is to change its auditions format for the new series. The original audition rooms are to return as part of a new 'double auditions' format which sees contestants perform for the judges in an intimate setting before going on to an auditorium. A source said: "The plan is to have the best of ...

both worlds with regard to auditions. So the contestants will start with just the judges in an audition room. If they get through then they will go on to an auditorium.
"Bosses believe it will bring more warmth back to the show because they know how popular the audition rooms were with both contestants and the audience at home."
The old format of having hopefuls singing acappella for the judges was dropped in favour of a bigger production in 2009. However, Simon Cowell reportedly hopes that the latest change will bring back viewers after the show dropped 2 million over the last series.
Meanwhile, nearly 8,000 hopefuls showed up to the first day of The X Factor's open auditions at London's ExCel yesterday (April 6), with some queuing from 5am for the chance to impress producers enough to go on to try out for the judges.
Host Dermot O'Leary, who was at the event, said: "It's great to see so many people braving the cold and turning out in their thousands for the first day of our auditions.
"It's always been a privilege to host The X Factor and even more so this year as its the tenth series. I can't wait to see how the contestants fare with our new double auditions. As always I'm looking forward to the laughs, the hugs, maybe not so much the tears, and watching really talented people... And some not so talented people.  "But that's the beauty of the show, you never know who's up next." The open auditions continue in Birmingham, Cardiff, Manchester and Glasgow this month.