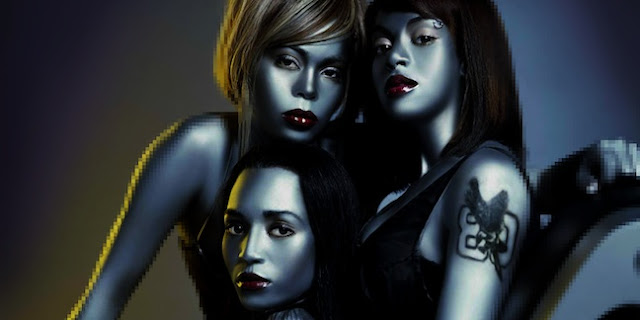 Hi everyone, i want to introduce a new column to my blog based on the music act im very interested it at the moment cause i found out that i listen to a lot of new music but from time to time i get fascinated by an act and their whole discography becomes my constant playlist. Ill stat with my current playlist and i hope you enjoy it as much as i love it 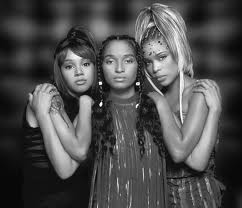 TLC is an American girl group whose repertoire spanned RandB, hip hop, soul, funk, and new jack swing. Originally consisting of singer Tionne "T-Boz" Watkins, rapper Lisa "Left Eye" Lopes and singer Rozonda "Chilli" Thomas, the group found unprecedented success in the 1990s while also enduring a series of spats with the law, each other, and the group's record label. The first TLC album, Ooooooohhh... On the TLC Tip, was released on February 25, 1992 by LaFace which sold 6 million copies worldwide. it spawned singles like


The songs on the album are a blend of funk (Watkins), hip-hop (Lopes), and RandB (Thomas), similar to the "new jack swing" sound popularized by producer Teddy Riley in the late 1980s.  The musical formula was augmented by the girls' brightly colored videos and curious costuming: each girl wore wrapped condoms on their clothing (Lopes also wore one over her left eye in a pair of glasses).
Initially, TLC achieved commercial success following the release of their debut album Ooooooohhh... On the TLC Tip, which sold 6 million copies worldwide. However, it was their second album, CrazySexyCool, that catapulted the group to superstar status.
During early 1994, TLC re-entered the studio with Dallas Austin, Tim and Bob, Jermaine Dupri, Babyface, Organized Noize, and Sean "Puffy" Combs to record their second album. The album moved away from the rap elements from their previous album, in favour of a smoother, seductive, r&b/soul sound. It relied heavily on the vocals from Tionne "T-Boz" Watkins and Rozonda "Chilli" Thomas, and featured less raps vocals by Lisa "Left Eye" Lopes. CrazySexyCool went on to be certified diamond by the RIAA— a first for a female group, and eventually sold 23 million copies worldwide. it spawned singles like

CrazySexyCool has sold over 23 million copies worldwide, becoming the best-selling album by a girl group in the United States, and the second best-selling album worldwide by a girl group behind Spice Girls' Spice. In 2003, the album was ranked number 377 on Rolling Stone magazine's list of The 500 Greatest Albums of All Time.
Five years later, the group released their third album FanMail, which became the group's first album to debut at number one and sold more than 11 million copies worldwide. The subsequent tour following FanMail's release became the highest grossing tour of all time by a female band. The title of the album is a tribute to their fans who sent them fan mail during their hiatus.The album title is a tribute to TLC's fans after their 5 year hiatus. The title came from group member Lisa "Left Eye" Lopes, who also coined the group's first two album titles, Ooooooohhh... On the TLC Tip and CrazySexyCool.
The album took on a new world, futuristic style, which was highly popular throughout the late 1990s to early 2000s. This style was effectively portrayed in the albums most popular song "No Scrubs", along with the music video, which embraces a modern emphasis on female strength and independence.  it spawned singles like


FanMail became a global success. The album debuted on top of the U.S. Billboard 200 and spent five non-consecutive weeks at number one. It also debuted at #1 on the Top RandB/Hip-Hop Albums chart. According to Nielsen SoundScan, it sold 4.7 million copies in the US., and has been certified 6× platinum by the RIAA for shipping six million copies. Internationally, the album reached the top ten in New Zealand, Canada, and the United Kingdom. At the 2000 Grammy Awards, the album received 8 nominations, including one for Album Of The Year. The album won three awards.
FanMail was the group's final album released during Lisa Lopes' lifetime, before she died three years later. In 2002, Lisa "Left Eye" Lopes died in a car accident in Honduras. Seven months later, T-Boz and Chilli released the group's fourth album 3D. 3D is the fourth and final album by American girl-group TLC. it featured unreleased vocals from Left Eye. it spawned singles like

During and after the release of FanMail, Lopes made it known to the press on multiple occasions that she felt that she was unable to fully express herself working with TLC and Austin. Her contributions to the songs had been reduced to periodic eight-bar raps, and studio session singers such as Debra Killings often took her place on the background vocals for the group's songs. In its November 28, 1999 issue, Entertainment Weekly ran a letter from Lopes that challenged her group mates to record solo albums and let the fans judge which of the three was the most talented:


"I challenge Tionne 'Player' Watkins (T-boz) and Rozonda 'Hater' Thomas (Chilli) to an album entitled The Challenge... a 3-CD set that contains three solo albums. Each (album)... will be due to the record label by October 1, 2000... I also challenge producer Dallas 'The Manipulator' Austin to produce all of the material and do it at a fraction of his normal rate. As I think about it, I'm sure LaFace would not mind throwing in a $1.5 million dollar prize for the winner."


T-Boz and Chilli declined to take up the "Challenge", though Lopes always maintained it was a great idea. Things were heated between the ladies for some time, with Thomas speaking out against Lopes, calling her antics "selfish", "evil", and "heartless". TLC then addressed these fights by saying that they were very much like sisters that have their disagreements every now and then; as Lisa stated, "It's deeper than a working relationship. We have feelings for each other, which is why we get so mad at each other. I usually say that you cannot hate someone unless you love them. So, we love each other. That's the problem." After the conclusion of the successful FanMail tour, the ladies, however, took some time off and pursued personal interests. Lopes was the first to begin recording her solo album, Supernova, however it underperformed overseas and was never officially released in the United States.


During this time period, it was stated by Thomas she had begun working on a solo project and had realized that rumors of TLC's demise had taken over in the media. It was then that Thomas made a call to LaFace label-head L.A. Reid to discuss working on TLC's fourth studio album. After contacting Watkins, and soon after, Lopes, sessions for what would become 3D had begun. However, soon after recording had begun, sessions came to a halt, as Watkins was hospitalized in January 2002 due to complications stemming from her ongoing battle with sickle-cell anemia. In April 2002, as Watkins' condition improved greatly, Lopes disappeared to Honduras to do missionary work and begin work on her second studio album. Watkins and Thomas began plotting their next moves as a duo.


On April 25, 2002, Lopes was killed in a car crash leaving behind material that she had recorded for her own solo album and for TLC's fourth studio album. She was 30.
Returning from yet another hiatus after Lopes' death, Watkins, Thomas and Austin decided that they would complete the remainder of their fourth album, to be called 3D, which also featured production from Rodney Jerkins, The Neptunes, Raphael Saadiq, Missy Elliott and Timbaland. The decision was also made that TLC would retire after the release and promotion of 3D, rather than replace Lopes and continue.

This decision would later change as TLC announced in 2009 that they would possibly begin recording a fifth studio album, but still refused to replace Lopes; ultimately, this possibility of a new studio album did not materialize.

Billboard magazine ranked TLC as one of the greatest musical trios. Between 1992 and 2003, the band accumulated ten top ten singles, four number one singles, four multi-platinum albums, and four Grammy Awards. At the end of 1999, TLC was ranked as the seventh most successful act of the 1990s by Billboard. In 2008, the group was inducted into the All Time Hot 100 Artist Hall of Fame by the same magazine, at 56th place. That year it was also listed as the #25 RandB/hip-hop artist of the preceding 25 years. TLC has sold more than 65 million records worldwide, and they are ranked as the second best selling female group of all time, and the best selling female RandB group of all time. In 2012, TLC ranked 12th on VH1's 100 Greatest Women in Music, being ranked the number one all girl group on that list.
Although iv fully listened to all four albums, 3D was the album that i lived on when it first came out and i thought if Left Eye had not died, Maybe TLC would still had a whole lot more to give.
A lifetime movie biopic would be coming out soon so cant wait for that.

Email ThisBlogThis!Share to TwitterShare to FacebookShare to Pinterest
Labels: My Current Fascination, TLC