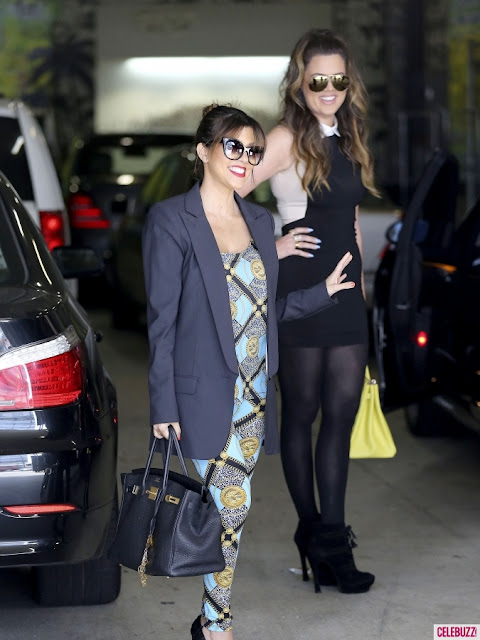 Kourtney Kardashian has two kids and Kim's expecting her first baby, but their married sister Khloe is still struggling to get pregnant. Well, that's when sisterly love comes in. In the latest episode of "Kourtney & Kim Take Miami," Kourtney reveals that she's considering carrying a child for Khloe and her husband Lamar Odom, since her 28-year-old sister is having trouble conceiving on her own. Khloe has been open about her battle with infertility, confessing on the show that she doesn't ovulate and is also taking pills to thicken her uterus lining. "If that doesn't get thicker," she explains, "then I cannot carry a baby."
In a sneak peek at the episode, Kourtney asks her baby daddy ...
and longtime boyfriend Scott Disick what he thinks about her being a gestational carrier for Khloe and Lamar.
"I wanted to ask you your thoughts on me being a surogate for Khloe. How would that make you feel?" Kourtney, 33, asks Scott, who smirks at the question.
"You're telling me you want to get pregnant, carry a child and give it to Khloe?" he asks.
"It would be her child with Lamar," Kourtney explains. Still, Scott can't seem to wrap his head around the idea, saying, "That's weird. Why wouldn't you adopt a kid in need?"
Kourtney tries to tell Scott that Khloe and Lamar most likely want a "blood child" ... and he fires back. "You don't just go putting babies in other sisters because you can .... This is not a normal conversation to come home with! It's too much for me. This is freaking me out!"
"Nothing is happening," Kourtney reassures him. "I was just having a conversation." But in the end, it's Scott who realizes that it might actually be a good thing for Khloe. "I want her to be happy and I feel like she wants a kid so bad," Scott tells Kourtney later in the episode. "I take back some of the things I said to you thinking you were crazy about carrying her child. I still think it's a huge decision, but I understand why you'd want to do that for your family."
Not so fast though, Kourtney. It sounds like Khloe is not into the idea: "You would push my baby out of your vag[ina]?! ... Ewww." lol funny people