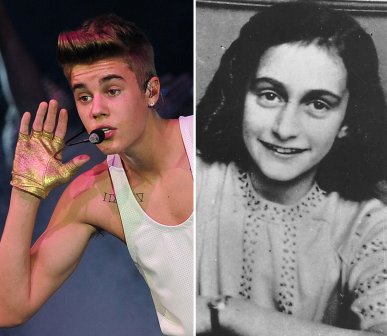 Justin Bieber's European tour hit its latest publicity snag. The Anne Frank House, an Amsterdam museum dedicated to preserving the memory of the girl and family who hid from Nazi persecution during World War II, posted news on its official Facebook page that the pop star had recently visited the location. Along with news of the Believe artist's visit, the museum relayed what Bieber wrote in the guestbook: ... 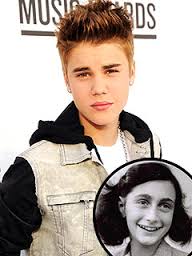 "Truly inspiring to be able to come here. Anne was a great girl. Hopefully she would have been a belieber."

A BBC correspondent based in the Netherlands confirmed with the Amsterdam Museum that the visit and note were real. Commenters on the museum's Facebook page were less than thrilled, calling Bieber's message tacky and self-serving. "Tacky, tacky, tacky," wrote one incensed visitor. "It's not all about you, kiddo. Imagine even THINKING that, in SUCH a place. Hang your head in shame, you wouldn't have survived ONE DAY of what Anne Frank endured, you priveliged (sic) twit."
Another commenter wrote, "Really? Putting in your own trivialized moniker belieber on one of most important figures of the 1940's. Someone needs to teach this kid to properly address certain topics with a professional attitude." Bieber is scheduled to play three tour dates in Oslo, Norway this week before playing at Parken Stadium in Copehhagen, Denmark on Saturday, April 20.
Posted by afowzocelebstar