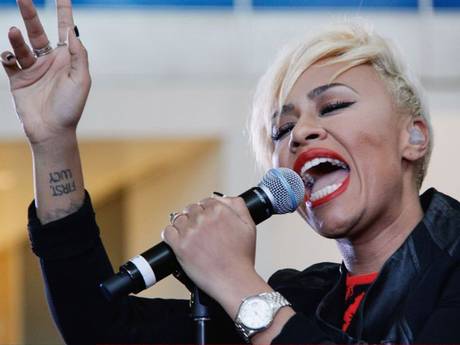 Emeli Sande's Our Verison Of Events has overtaken The Beatle's Please Please Me as the debut album that's spent the longest in the UK top ten albums chart. Our Version Of Event was released last February and became the biggest selling album of 2012. It has now spent ...
63 weeks in the top ten, smashing the record set by the fab four nearly 50 years ago.

Please Please Me, the debut LP from Liverpool’s finest, spent 62 weeks in the top ten between its release in 1963 and 1964.
Sande’s debut, which is sitting at No. 5 this week, has now sold 1.82 million copies and spent ten weeks in the No. 1 spot. It has also broken the 100,000 weekly sales barrier on three different occasions during its time in the top ten. Just this year it’s sold 429,000 copies and is the biggest selling album of 2013 so far. Speaking to the Officials Charts Company Sande said: “I’m completely lost for words and this is something I could only have dreamed of. The Beatles are the greatest band of all time and their legacy lives on and continues to inspire all of us that make music. Sande's debut was the biggest selling record of 2012 “I’m so happy that so many people have connected with the stories and the songs on the record, this really is our version of events now. “I'd like to say thank you to everyone that has bought, played or shared my music in the last year, without your support this would never have been possible.”
Posted by afowzocelebstar