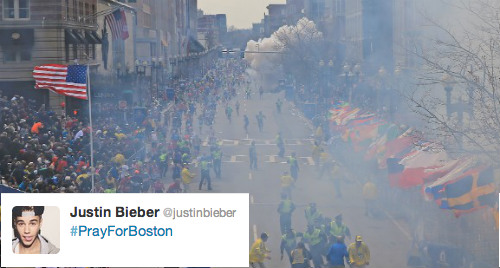 Many singers and rappers are expressing their thoughts on the tragedy that struck the city of Boston as two explosions went off at the Boston Marathon’s finish line around 3:15 p.m. on Monday, the Associated Press reports. At least two people are ...
dead and 23 others are injured. The Boston police commissioner reported that a third explosion went off at the JFK Library but there has been no injuries. Cell phone service has been cut off in the city of Boston to “prevent any potential remote detonations of explosives.” The police also found two other bombs and dismantled them before they could cause harm. Nicki Minaj, Alicia Keys, 2 Chainz and more artists who heard about the unfolding incident have already tweeted their sympathy to the victims.

Nicki Minaj        ✔ @NICKIMINAJ
My heart goes out to everyone who woke up this morning to enjoy a peaceful marathon but were met w/senseless destruction. #GodBlessAmerica