Britney Spears may be collaborating with Wiz Khalifa on her new album. Writer Jean-Baptiste took to Twitter to praise will.i.am for his songwriting for the new LP before tweeting Wiz Khalifa about a supposed verse he has recorded for one of Spears's songs. He tweeted: "That n***a @iamwill isn't playing fair with these new ... 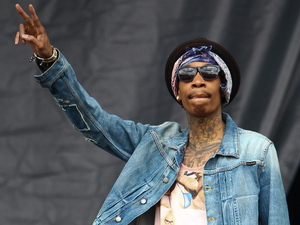 @britneyspears records. I gotta step it up." Baptiste co-wrote will.i.am and Spears's recent hit 'Scream & Shout', and is writing material for the 31-year-old's upcoming album. He continued to tweet about the record, this time to rapper Khalifa: "@wizkhalifa Yo!!!! Can a n***a get that Britney verse bruh?"
The 'Toxic' singer is currently recording the follow-up to 2011's Femme Fatale. She is also working with Hit-Boy and Elijah Blake on the record, which is expected to be released later this year.
Baptiste teased fans about the singer's new material, adding that people will be "inspired". He said: "This @britneyspears album is gonna be album to be inspired by, and also the most thrillest and most grammyist!!!" here's to hoping it lives up to the hype