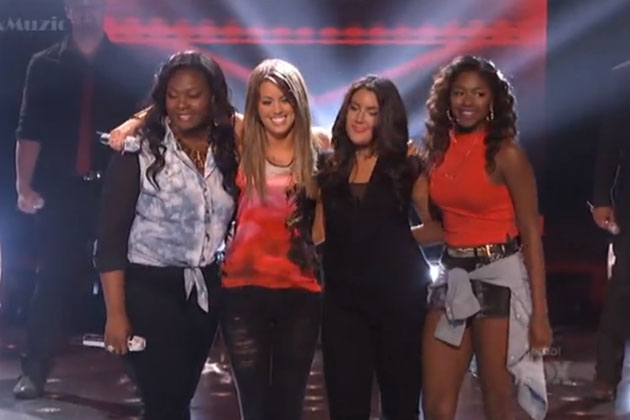 The Top 4 girls kicked off the last episode of ‘American Idol’ with a sassy group rendition of Alicia Keys‘ ‘Girl on Fire.’ Then, a few surprise guests made their way to the singing competition’s stage. Stefano Langone, from ‘American Idol’ season 10, made a surprise visit and performed his new ...
single, ‘Yes to Love.’ Season 9 winner Lee DeWyze also sang his new tune ‘Silver Linings.’ Rapper Drake left a congratulatory audio message for Candice Glover but surprised everyone, including the songstress herself, when he showed up to personally congratulate her. Glover happens to be one of his biggest fans. “I wanted to let you know that I was so honored that you sang my song. You have such great voice,” he said to the beaming ‘Idol’ hopeful.

Things took a twist when Glover and Amber Holcomb landed in the bottom two. Luckily, both were saved by a technicality. Ever since the judge’s “save” was introduced to the show, an extra week had been built into the ‘Idol’ season. Since the judges didn’t use the save, the top 4 remain intact and no one faced elimination until the next judging round.
Make sure to vote next week though because the votes from this week will be tallied with those from next week to decide whose ‘American Idol’ journey will be cute short.
Posted by afowzocelebstar